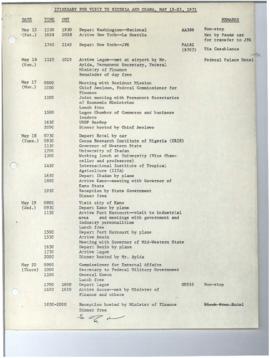 This series includes chronological correspondence, memoranda, and other records of Heywood Fleisig created or received during his position as Principal Economist in the Office of the Chief Economist, Latin America and Caribbean Region (LACCE). The records are primarily devoted to economic and sector work (ESW) planning, and reporting for the Latin America and Caribbean Region (LAC). The records include: initiating memoranda; ESW business plans; ESW task briefs; terms-of-reference; back-to-office reports; and research paper and survey proposals. The series also includes meeting minutes from LAC regional ESW planning meetings, and draft policy papers with handwritten notes and comments by Fleisig. Most memoranda and correspondence are between Fleisig, the Region's Lead Economists, and other staff in the LAC Region. Correspondence between Fleisig and the Office of the President (EXC) are also included.