The records are largely electrostatic copies of correspondence and papers, filed by the type of function that generated the records. The majority of the records date from 1992-1995 when Shalizi was chief of the Transport Division.

The records are arranged in four sections. The first section has administrative records; the conference files include the background readings for a 1991 seminar for Bank staff on air quality in urban transportation.

The second section is records of research projects funded by the regular budget, trust funds or other special funds. Four of the research proposal files consist primarily of reviews of proposed Bank positions on taxation policies and on poverty lending in the urban sector, 1980-1991, and three additional files concern Bank transport sector policy and performance reviews, 1992-1995. The chronological file consists principally of notes and correspondence regarding the review of taxation and poverty policies found in the research proposals. The papers and a small quantity of correspondence were written by persons other than Shalizi and sent to him for his comments or use. The topics range from road pricing to automotive emissions in developing countries to railways to informal gold mining and mercury pollution in Brazil. The publications are primarily those produced by the Bank, although a few others from sources such as the Journal of Transport Economics and Policy are included. The principal topics are railways and transport-related air pollution; some correspondence related to the publications is included.

The third section consists of records of operational support for projects. One of the four files consists of country studies of taxation in Mexico, Brazil, Nigeria, Indonesia, and Malawi. This is followed by three files of correspondence, arranged chronologically, commenting on projects and studies, proposed and ongoing.

The fourth section is records of research projects funded by the Bank's Research Support Budget. The majority of the files relate to Shalizi's 1989-1991 project on a "Practical framework for evaluating mineral payment/taxation schemes" and are linked to the taxation files found in the second section. In the publications file is a copy of the project document on "Trade and transport in West and Central African States" dated April 1993, while the files of original research data include two papers co-authored by Shalizi, "Contract Policy and the Variability of Government Revenue form Mining Projects" (1990, with R. Conrad and J. Syme) and "The Role of Extraction Charges in Mineral Contracts (1991, with R. Conrad and M. Engers). The research files also include three files on the project on taxation in developing countries, one file on a framework for tax policy analysis in Sub-Saharan Africa, two files on uniform rates of effective protection and efficient taxes, and three files on an analysis of the tax system in developing countries as applied to Pakistan and Mexico. 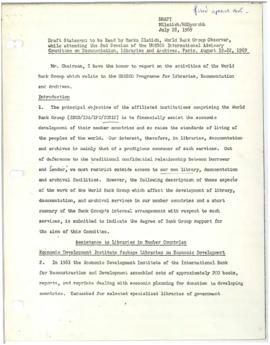