The papers relate almost exclusively to Indonesia. They include her dissertation and its background data survey sheets. The papers also include background information on all the Indonesia projects in which Davis was involved between 1978 and 1986, including correspondence, subject files, data survey sheets, statistics and computer printouts of statistical analyses. The files on one project in Fiji are included. Davis obtained many official Indonesian government documents during the years when her focuswas on Indonesia. These are found both in correspondence and data files as well as in the set of reports in Bahasa Indonesian. Davis maintained a set of speeches, articles and monographs, mainly about Indonesia, that were written by colleagues. She also maintained sets of publications on Indonesian topics from various research institutions in Indonesia and other countries. The files do not include correspondence with family and friends. No photographs are included. The files are of interest primarilyto students of the history of Indonesia and to the study of migration. The raw data collections are particularly valuable.

This series consists of notebooks that Davis kept or obtained during surveys of villages in Indonesia involved in transmigration. The first five notebooks relate to villages that she studied for her Ph.D. dissertation, of which the first four are Davis' notes and the fifth is a report written to her.

The next four notebooks are numbered, and the last is annotated very rapid general survey please hold and return. The second notebook is dated 12-3-78, giving the date for the survey. Each reports survey data from the villages of Pulung Kencana, Candra Kencana, Penumangan, Panaragan Jaya, Tara Karya, Bangun Sari, Sidomukti, Purbasakri, Makari, Marga Mulyo, Daya Sakri and Daya Murni. The names of the persons interviewed are not included. The data are date of arrival, originally from, type of migration, how many people were at home and how many migrated, what property is owned here and what property in Java, what type of house, occupation in Java, money brought from Java when migrating, number of times returned to Java, number of people who followed you here, and questions about the land given and purchased, crops grown and productivity of farm, fertilizer use, off-farm work, income here and in Java, expectations as against reality, and biggest difficulty.

The third set of notebooks are numbered 1-5 and labeled Unit Desa I (3 volumes) and Unit Desa II (2 volumes). They contain the same type of data as the second set of notebooks. These villages were organized by blok; in village I the bloks had letters for identification (for example, Blok E) while in the second village the bloks carried both a letter and the numeral II (Blok C II). In these surveys the name of the family surveyed is included.

RMI Consultants Monthly Report No. 27, for July 1982 in respect of the overall transmigration programme and the Trans II project.

RMI Consultants Monthly Report No. 26, for June 1982 in respect of the overall transmigration programme and the Trans II project

RMI Consultants Monthly Report No. 24 for April 1982 in respect of the overall transmigration programme and the Trans II project. 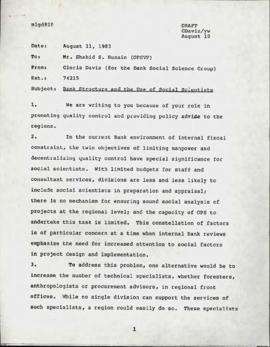