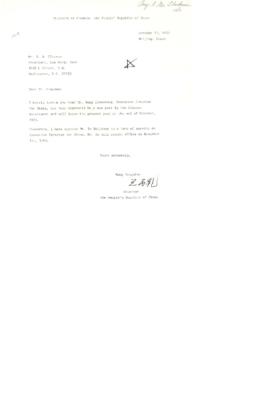 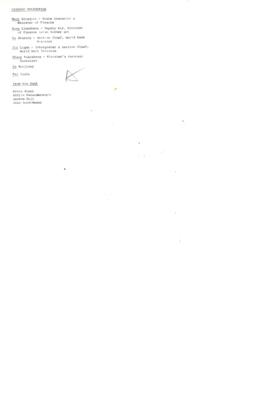 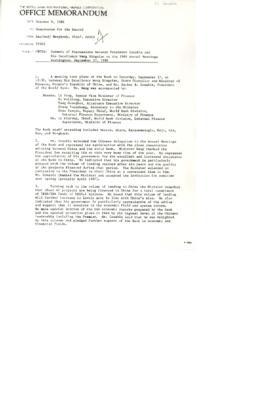 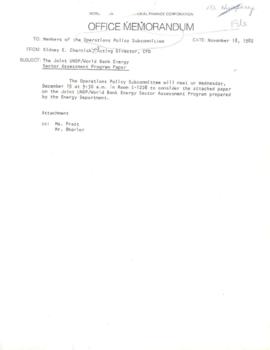 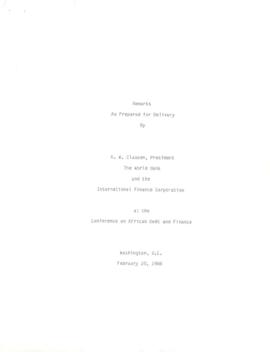 Records of President A. W. Clausen

Prior to becoming the World Bank Group's 6th President, Alden Winship "Tom" Clausen (1923-2013) had a long and successful career at Bank of America. After graduating with a law degree from the University of Minnesota in 1949, Clausen joined the BankAmerica Corporation. He was a senior vice president by age 42 and two years later became responsible for the Bank's international lending business. In 1970 he became president and CEO.

When Clausen became World Bank Group President in July 1981, the international economy was deep in recession. This contributed to a growing debt crisis in developing countries. It was also a period characterized by increased skepticism towards foreign aid, particularly by the Ronald Reagan administration in the United States. Clausen's response to these challenges involved an increased reliance on free markets and private sector institutions. He also recognized the need for the Bank to increase cooperation with other agencies when appropriate.

Early in his presidency, Clausen announced three priority areas which would receive special attention during his tenure: agriculture; energy; and Sub-Saharan Africa. Energy sector projects, in particular, were prioritized, as Clausen saw an urgent need to promote new supplies of energy. He announced an immediate 25% increase in energy lending, including substantial amounts for hydroelectric power projects, thus becoming the single most important area for Bank lending during his tenure. With regard to Sub-Saharan Africa, Clausen endorsed and implemented many of the suggestions found in a 1979 Bank study that examined barriers to economic progress in Africa. Recommendations included doubling the amount of aid to Africa to support infrastructure development and agriculture and energy sector funding. It also recommended structural redesign of economic policies in order to promote efficiency, encourage better market incentives for production, reduce subsidies to uncompetitive industries, and promote exports. Related to these objectives and in response to the ongoing debt crisis, the Bank increased funding of sectoral and structural adjustment, committing a total of $12.5 billion for adjustment operations by the time Clausen left the Bank in 1986.

The support of structural reforms required an expansion of the Bank's analytical work. The Bank under Clausen and chief economist Anne Krueger emphasize trade liberalization and became heavily involved in helping governments investigate their economic problems and identify available solutions.

In order to stimulate capital flows from other sources, the World Bank Group under Clausen increased its focus on cofinancing. Clausen turned to export credit agencies and commercial banks with the intention of helping developing countries enter into capital markets. He also increased the number and frequency of aid consortia and consultative groups and endorsed the "B-loan", a loan product that allowed IBRD participation in commercially structured loans. Recognizing that private investment was constrained by investors' inability to manage political risk, the Bank, under the leadership of general counsel Ibrahim Shihata, began planning the formation of an investment insurance agency. The resulting Multilateral Investments Guarantee Agency (MIGA) came into existence in 1988.

As President, Clausen presided over extensive reorganizations of the Bank's economic analysis, research, and policy activities, as well as its Central Projects staff. He also reorganized the way in which his senior management team communicated with him. Immediately upon his appointment, Clausen established a Managing Committee consisting only of the heads of each complex: the Senior Vice Presidents of Operations (Ernest Stern) and Finance (Moeen Qureshi); the Vice Presidents of Development Policy (Hollis Chenery followed by Anne Krueger in 1982), External Relations (Munir P. Benjenk) and Administration (Martin J.W.M. Paijmans); the General Counsel (Heribert Golsong); and the Secretary (Timothy T. Thahane). This Committee functioned as a team making basic decisions with regard to development policy strategy, resource acquisition and allocation, operating policies and program planning as well as administrative and financial policies. It was also charged with an immediate review of the Bank's programming, budgeting and control processes.

A. W. Clausen became World Bank President in July 1981 and served a full five year term. Shortly after he became President, Clausen established a Managing Committee to provide overall administrative and programmatic control of the Bank's activities. The records of the Clausen presidency are best approached through the official files of this Managing Committee, which provide comprehensive documentation on virtually all issues before the Bank during those years. Both Clausen's personal records of the Committee as well as the Committee's official records are part of this sub-fonds.

Clausen was President during the world debt crisis of the early 1980s, and throughout the files are documents about the issues of debt management and the Bank's programs of sectoral and structural adjustment. Discussions of a multilateral investment insurance program began during the Clausen years, which culminated in the establishment of the Multilateral Investments Guarantee Agency (MIGA) after Clausen left office. Both the Special Assistance Program for countries coping with the global recession and the Special Facility for Africa to provide policy reform assistance in sub-Saharan Africa were launched during Clausen's tenure, and the Clausen years saw a growing emphasis on programs in agricultural and rural development and environmental management, among others. Evidence of Clausen's personal interest in these issues can be found throughout the records, but particularly in the extensive set of alphabetical subject files that show Clausen's involvement with issues and organizations. Clausen's views are also evident in the chronological file of his outgoing correspondence during his entire time in office.

The country files and the itinerary files on official trips are good sources of information on the Bank's relationship with and the economic situation in the member countries. The records include photographs of Clausen's visits to countries and to World Bank projects.