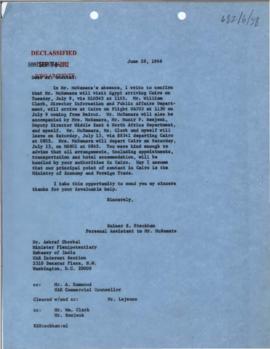 These files were sent from the Office of the President to the Archives on 3 June 1981.

This series consists of copies of letters and memoranda drafted by McNamara or drafted for him, in his Office or another department of the Bank, except those drafted by the Bank's Department of Information and Public Affairs (IPA). Originally this series contained the Personal Assistant to the President's copies of McNamara's outgoing correspondence, with the President's office maintaining a separate series of McNamara's personal outgoing letters. Beginning in 1973 these two were merged in this series.

The addressees are heads of States, international organizations and regional banks, government officials, Bank Governors and Executive Directors, U.S. Senators and Congressmen, bankers, lawyers, journalists, publishers, and scholars. Subjects range from congratulations, invitations to the annual meeting of the Bank and thank-you notes following official trips, to World Bank bond issues, the replenishments of IDA, the approval, status or questioning of a loan, development activities of other agencies, and development policy. The series also includes short memoranda addressed by McNamara to his senior staff that reflect the President's close monitoring of the operations of the Bank and his particular concern for the areas of agriculture, education, nutrition and population.