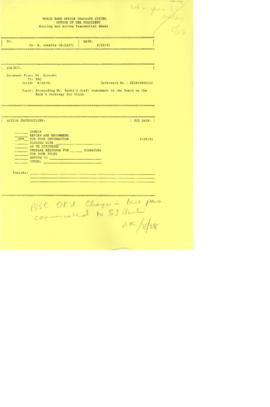 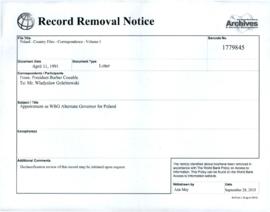 Most of the files in this series were sent to the Archives from the President's office in June 1992, except the files on the USSR which were retained until November 1992, when they too were sent to the Archives. In addition, the Brookings Institution team that was writing a history of the Bank borrowed a number of files from the President's office, including the files on Brazil, China, Cote d'Ivoire, France, Germany, Japan, Mexico, Philippines, Poland, Turkey and Yugoslavia; these were turned over to the Archives in 1997. All files have been interfiled.

This series contains records of President Conable's meetings with representatives, delegates, and heads of the member countries; briefing notes for meetings with country leaders; general background information on countries and governments; press releases; correspondence with government leaders; memoranda of advice from staff members; and congratulatory and thank you letters. Topics covered in the records include external debt; Bank lending operations and criteria, and environmental concerns. Three files cover regions in Africa - Eastern, Southern, and Sub-Saharan - rather than an individual country, in addition to individual files on most countries in those regions. No files on the United States are included.

The files on the USSR are significant, as the period of the Conable presidency covers the late twentieth century political changes in Eastern Europe and the Soviet Union. Of particular interest are the files on a joint study that the 1990 economic summit in Houston, Texas, asked the Bank and the IMF toundertake. The study, completed between July 1990 and May 1991, surveyed the Soviet economy, made recommendations for its reform, and established criteria for Western economic assistance to support reform.

Many of the files contain records dating from the Clausen presidency, some as early as 1984; apparently Conable used the Clausen country records as building blocks for his information on the countries. Similarly, the files on the USSR contain some records that post-date the Conable administration by several months (until December 1991), as the incoming Preston administration continued to use them.