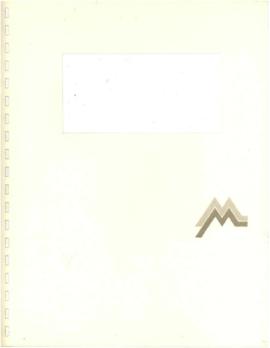 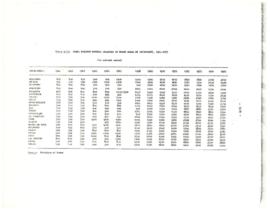 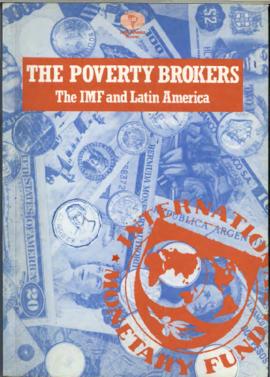 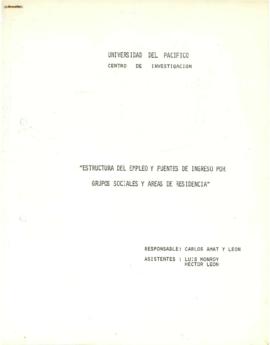 This series contains a variety of research materials accumulated in support of research projects undertaken by various staff in the Policy Research Department (PRD) and its predecessors, the Poverty Analysis and Policy Division (PHRPA) and later the Welfare and Human Resources Development Division (PHRWH) of the Population and Human Resources Department.

This series contains background materials, and administrative and research records from 1972 to 1991 (predominant 1985-1991) relating to the Living Standards Measurement Survey (LSMS) update for Peru in 1990. Records were compiled by Gillette Hall who was, along with Peruvian economist Richard Webb, responsible for the update. The original LSMS for Peru was conducted in 1985-1986 jointly by the Peruvian government and the World Bank (specifically the Education Department and the Development Research Department). These records consist of World Bank and Peruvian government studies, reports, and articles containing background materials on social and economicconditions in Peru, 1972 - 1985, that were gathered as part of the first survey. There is also a small amount of administrative material (back-to-office reports, notes regarding data entry, sample questionnaires, a summary of initial results from the survey, a list of studies based on the 1985 - 1986 data, and notes on fieldwork) relating to the first survey. Hall's records of the 1990 survey and of later research regarding Peru include: applications for funding; notes regarding the project's budget and sampling methods; background articles and reports on Peru published after the 1985 - 1986 survey; back-to-office reports for the Peru Social Sector Review, January 14 - 25, 1991 and for a mission to prepare for the update of the LSMS, June 17 - 18, 1991; correspondence concerning a fiscal year 1992 regional study to include programs in Peru; a copy of Hall's Cambridge University Master's thesis; notes prepared for a presentation on the 1990 survey; articles by Hall regarding conditions in Peru; and various drafts of an article on poverty in Peru by Hall and by Paul Glewwe of the PHRPA and later the PHRWH of the Population and Human Resources Department.

The series also contains records compiled by Elizabeth M. King relating to nine Bank published research papers pertaining to Peru that were authored, co-authored, or reviewed by King while working as an Economist first in the Education and Employment Division of the Population and Human Resources Department (PHREE) and later in PRDPH. The nine papers appear to have been based primarily on findings from the Living Standards Measurement Survey (LSMS) conducted in Peru. Six of the nine papers were published in the LSMS Working Papers series. Two papers were published in the Bank's Policy, Planning and Research Working Papers series and one paper was published as a Policy, Planning and Research Working Paper. In addition to drafts of the papers, which relate primarily to education and wages in Peru, the series includes: reference copies of other papers relating to Peru; computer generated tables relating to wages, GDP, and education in Peru; copies of a few papers presented by King at professional meetings; 5 1/4 inch floppy discs primarily containing different versions of reports as well as a small amount of research; and presentation materials. There is also some correspondence concerning a proposed book based on findings of the Peru LSMS.

Finally, records relating to World Bank staff research as part of the Youth Training and Employment Partnership Programme (YTEPP) in Trinidad and Tobago are included in this series. Most of the records were created in the PHRWH, although activities related to the YTEPP were moved to PRDPH in 1993. Records include correspondence, back-to-office reports, Terms of Reference, memoranda, YTEPP publications, questionnaires and codebooks. Also contained are 3 1/2 inch floppy discs that appear to contain research data in various forms.

Records are arranged first by research topic or paper and thereunder chronologically.

Due to issues with both hardware and software requirements, information on floppy discs may not be available.