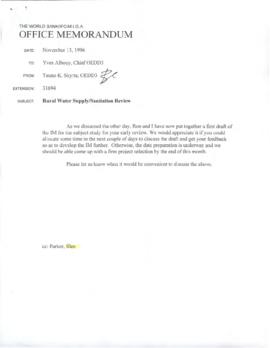 The series primarily consists of Impact Evaluation Reports (IERs) and the working files produced during the creation of those reports. The series also consists of a number of special studies produced by the OED. IERs assess the performance of operations at full development, some five to ten years after the close of disbursements on the Bank's loan. The evaluations are selective; only a small percentage of projects undergo an impact evaluation. These evaluations provide a second look at a project by analyzing the long-term effects - intended or unintended - on people, institutions, and the physical environment. The evaluations assess projects against the goals that were stated at appraisal and also against a broad set of criteria that relate to social dynamics, income distributions, effects on women and families, institutional development, sustainability, and the environment. This series consists of IERs from the very beginning of their production in 1979 and through into the 1990s.

The content of the files for impact evaluations varies somewhat but the more complete files contain: copies of the Completion Reports, Audit Reports, and other OED-generated records relating to the project; non-Bank background reports and publications relating to the project; Terms of Reference for the OED staff members and/or consultants assigned to evaluation; drafts of the Approach Paper and Study Design Paper; memoranda and correspondence regarding the team's travel plans if a mission was required; a Back-to-Office Report regarding the mission; intra-OED correspondence regarding the format for the evaluation; various drafts of the evaluation; comments on the drafts from OED and Regional staff, officials in the client country, and representatives from other aid/lending organizations; drafts of comments by the Director-General, Operations, (DGO) to the Committee on Development Effectiveness (CODE) or its predecessor, the Joint Audit Committee (JAC) regarding evaluations; minutes of CODE or JAC meetings at which the evaluation was discussed; drafts of the DGO's transmittal memorandum to the Executive Directors and the President; and summaries of the Executive Directors' discussion of the evaluation and copies of the Board chairman's published comments. Many of the impact evaluations relied on field surveys to gather opinions of stakeholders. The raw survey data is not included in an evaluation file, but sample survey questionnaires and data derived from the surveys may be in the file.

The series contains the first IER produced by theOED, referred to as a Project Impact Evaluation Report (PIER). The report was for the Mexico Third Irrigation Project (1978 - 1979) which focused on irrigation rehabilitation programs in irrigation districts Nos. 17 (Region Lagunera) and 23 (San Juan del Ro). The evaluation was undertaken by Chief Evaluation Officer John Malone about five years after the performance audit was conducted for the project. Other early impact evaluation reports in this series are for: Kenya's First Smallholder Agricultural Credit Program (1980); the Kenya First Livestock Development Project (1981); the Roseires Irrigation Project in the Sudan (1980); the Burundi-First Arabica Coffee Improvement Project (1980); the Malaysian Muda and Kemubu Irrigation Projects (1981); the Atlantico Irrigation Project in Colombia (1982); and the San Lorenzo Irrigation and Land Settlement Projects in Peru (1982). In addition, records related to an IER conducted jointly with the National Economic and Development Authority (NEDA) and the Central Bank of the Philippines on the Philippines Second Rural Credit Project are included. The report was issued in 1983 after an extensive evaluation that involved a survey of beneficiaries in different regions. Also issued in 1983 was an IER for the Indonesia Irrigation Rehabilitation Project.

The series contains many other IERs and IER working files produced through the mid to late 1980s and 1990s. Agriculture, urban, education, transport, industry and transmigration projects are represented. Of note, one IER covers three income generating projects for refugees in Pakistan for which the Bank acted as executive agency on behalf of the United Nations High Commissioner for Refugees (UNHCR). Also contained are background materials on Indonesia that OED's Agriculture and Human Development Division (OEDD1) gathered from a wide variety of sources in preparation for a 1993 impact evaluation covering loans for three transmigration projects in Indonesia. The files include the Project Completion Reports for two of the loans (Transmigration II [L1707] and III [L 2248]) and Terms of Reference for the impact evaluation but no other documents regarding the impact evaluation.

The series also includes a number of special process and thematic studies. Reports and related working papers include: a 1987 and 1988 OED special study entitled Management of Renewable Resources in Agricultural Operations; two transport sector evaluation studies entitled The Transport Sector in Mexico: An Evaluation (1998) and Transport in China: An Evaluation of Bank Assistance (1999); a copy of a 1998 paper (The Industrial Organization of Corruption: Why Corruption Hurts More in Africa than in Asia) prepared by Sector and Thematic Evaluation Division (OEDST) staff members Antti Talvitie and Binyam Reja, based on their participation in an OED evaluation of five transport projects in Indonesia; background records for a 1996 Infrastructure and Energy Division (OEDD3) process study, Effectiveness of Environmental Assessments and National Environmental Action Plans (EA/NEAP Study), which evaluated the Bank's use of project-level environmental assessments (EAs) and highlighted the differences between countries that had an approved National Environmental Action Plan (NEAP) and those that did not; working files for the 1995 Country Policy, Industry and Finance Division (OEDD2) study The Social Impact of Adjustment Operations: An Overview; and special impact evaluation studies covering a range of agriculture topics, including Harvesting the Waters (1980s), The World Bank and Structural Adjustment in Agriculture; Reforming Agriculture: The World Bank Goes to Market, Irrigation O & M [Operation and Maintenance] and System Performance in Southeast Asia (1996), Natural Resource Management in Bolivia: 30 Years of Experience (1993), and Dynamics of Rural Development in Northeast Brazil: New Lessons from Old Project (1991), as well as one file for a special process study entitled Monitoring and Evaluation Plans in Staff Appraisal Reports Issued in Fiscal Year 1995.

Also in this series are correspondence, reports, and publications that evaluator Christian Polti gathered while OEDD1 was working on two impact evaluation studies. The first study deals with the World Bank's experience with irrigation development and examined irrigation projects in Morocco, Mexico, the Philippines, and Thailand. The second study deals with cotton development programs in Cote d'Ivoire, Burkina Faso, and Togo.

Original file arrangement has been maintained. Records are organized into files by project or report.

Researchers who are interested in operational projects are encouraged to reference the Projects and Operations Database on-line. The Projects and Operations Database search can be narrowed to include only those projects within individual sectors and it contains some final reports specific to each project. Should researchers wish to access the archival records related to these projects, cite the Project ID number when making a request.