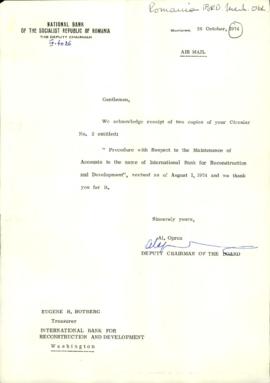 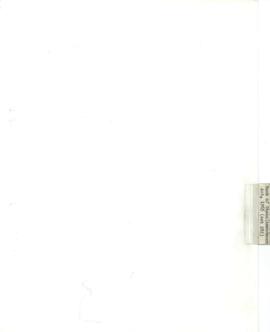 Records maintained in the World Bank Group's centralized files system were arranged into the Bank-wide classification scheme that grouped together International Bank for Reconstruction and Development (IBRD), International Finance Corporation (IFC), and International Development Association (IDA) membership, bonds, and finance records. The custody of membership records is not fully known, based on the clarity of available sources and the overlap of certain records between Central Files and Secretary's Department. However, the custody likely changed in two different periods as described below.

The Secretary's Department coordinates the process of new membership for countries joining the Bank Group, advises on procedures, and prepares the necessary membership documentation. The secretariat was one of four "specialized" departments authorized to keep their own official files apart from the Central Files. According to the 1947 Administrative Manual, the Secretary's Department will maintain records and proceedings of the Board of Governors and Executive Directors and "original, formal documents, such as those relating to membership, instruments of acceptance, and subscription increases". The custody of certain records appears to have changed in the early 1950s. A 1953 Administrative Circular states that except for the Board of Governors, Board of Executive Directors, the Advisory Council and committees of these bodes for which the secretary was responsible, "all other Bank documents previously sent to the Secretary, including loan and guarantee agreements and supplementary papers, should be sent for filing and custody to the General Files, Archives Division." Moreover, the Secretaries' Guide (1963 and 1972 versions) confirms that files concerning IBRD, IDA, and IFC membership were maintained in the renamed Central Files operated by the Records Management Section. By 1976, responsibility for membership records had returned to the Secretary's Department. According to the March 1976 Administrative Manual, the Secretary was responsible for the custody and handling of "current documents associated with membership, voting power, and changes in subscriptions".

Even during the periods when the Secretary's Department was responsible for maintaining membership records, the department's procedure as outlined in the Secretaries' Guide was to distribute yellow copies of outgoing correspondence and the original incoming letters to the Central Files once action was taken.

Membership files and the bonds and finance files initially maintained together in the Central Files became divided over time. As Central Files grew increasingly large in volume, the pre-1966 files were sent by the Records Management Section to the Bank's off-site records center in 1969. In the early 1970s when semi-centralized records stations were created, the IFC membership and finance files were relocated to the new IFC central files location in June 1971. In the following year, Regional Records Stations (RRS) were established for each of the various regions and IBRD and IDA individual country membership files were relocated with the regional files to the respective RRS from 1972 to 1974. The IBRD and IDA general membership (non-regional), bonds, and finance files were maintained in the Bank Administration and Policy Records Station (BAP, previously known as Central Files) during this same period. All the files, both from the RRS and the BAP, were relocated and reunited in the Bank Administration and Policy General Records Station (BAPRS) when it was created in 1975. The BAPRS operated until 1977 and the files were then held at the records center until their transfer to the Archives repository established in 1980.

The circumstances described here provide some reasoning for why membership-related records are found in both the Secretary's Department (as the unit primarily responsible for membership functions), and the Central files, which are described in this series.

Series contains records maintained in Central Files and semi-centralized filing stations from 1946 until 1977 that relate to membership of the International Bank for Reconstruction and Development (IBRD), International Finance Corporation (IFC), and International Development Association (IDA). The records originated in the departments and offices whose files were centralized over a period of time including, but are not limited to: Offices of the President and Vice President; Treasurer's Department and its Cashier's Division; Office of the Controller; Legal Department; and others. Records also originated from the Secretary's Department responsible for coordinating the membership process. The department distributed certain correspondence and related documents to the Central Files while likely maintaining its own official files.

Records include internal memoranda, letters, cables, drafts and final Board resolutions, Secretary's memoranda, financial statements, handwritten notes, press releases, press clippings, external reports, national legislation documents, and other records. Informal meeting notes and summaries of discussion during visits to countries are in the form of internal memoranda. There are also summaries of annual meeting discussions between regional staff with delegations prepared as internal memoranda. Letters are primarily between the Bank president, vice president, Secretary's or Treasurer's Departments and government officials such as ministers, central bank authorities, and ambassadors.

Individual country membership files were separately maintained for IBRD, IFC, and IDA. The files document early discussions of membership, changes in membership status, and occasionally refers to the political situation of the country interested in membership.

Within the IBRD membership records (1946 - 1977), country files are subdivided into membership, capital, depository, governors and alternates, and withdrawals of membership for certain countries. Correspondence specifically relates to: notifications of interest or intention for membership; acknowledgement of applications and updates on membership process; opening and closing of accounts; payments of contributions by central banks; revaluations and devaluations of contributions; problems of interest due and unpaid subscriptions; bearing demands; audit and policy questions; monthly statements of transactions; procedures for maintenance of accounts in the name of IBRD; and adjustments of loans.

Original order of the records has been maintained. Separate membership files are maintained for each country, for each WBG organization, and are arranged in alphabetical order.