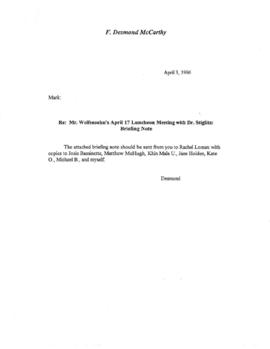 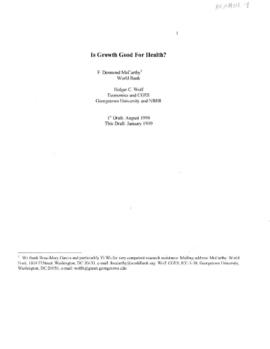 Desmond McCarthy was born in Cork, Ireland on December 2, 1936. He received a B.E. Electrical Engineering from National University of Ireland in 1958, followed by a PhD in Electrical Engineering from New York University in 1966 and an M.S. Economics from the Massachusetts Institute of Technology (MIT) in 1975. He subsequently spent time as a researcher at MIT prior to joining the World Bank.

McCarthy joined the World Bank in June 1981. During his 18 years as a staff member and ten more as a consultant, McCarthy held various positions in the operational, policy, research, and evaluation units of the Bank.

In 1981 McCarthy was an Economist in the Comparative Analysis and Projections Division of the Economic Analysis and Projects Department (EPDCA). The EPD was located in the Development Policy Vice Presidency (VPD), the Bank's research arm; it was transferred, along with most VPD functions, into the new Economics Research Staff (ERS) Vice Presidency in 1982. The EPD was primarily responsible for reviewing the Regional Vice Presidency's country economic analyses and programs and developing and operating macro-economic data systems related to national accounts, debt, capital flows, and trade.

In 1985 McCarthy entered the Bank's operations complex for the first time when he joined the Latin America and the Caribbean Vice Presidency (LCN) as a Senior Economist in the River Plate and Bolivia Division (LC2PB). He soon after moved into the Argentina Division (LC2AR) where he was the country economist for Argentina. Following the Bank-wide 1987 reorganization, McCarthy remained a Senior Economist in LCN but moved into the Country Operations Division of the Country Department responsible Costa Rica, El Salvador, Guatemala, Honduras, Mexico, Nicaragua, and Panama (LC2CO).

In 1988 McCarthy returned from the operations complex to the research arm of the Bank, called the Development Economics Vice Presidency after 1987. He would remain there until his retirement. His first position upon his return was in the newly established International Economics Department (IEC); the IEC had been created in the 1987 reorganization and had assumed some of the functions of the EPD. McCarthy was located in the International Economic Analysis and Prospects Division (IECAP) where he soon gained the title of Principal Research Economist.

In 1992 McCarthy moved into the new Development Policy Group (DPG) as an Economic Adviser. The DPG had previously reported to the Senior Vice President of Operations (OPNSV) in the form of the Economics Advisory Staff; it had advised the office on matters related to Country Strategy Papers (CSPs) and adjustment loans. Upon the termination of the OPNSV in 1991, it was placed in the DECVP but maintained its prior responsibilities.

Between 1993 and 1999 McCarthy served as Economic Adviser first to the DECVP and then to the Development Research Group (DECRG).

McCarthy retired from the Bank in 1999 but served as a consultant for the Bank in a variety of capacities over the subsequent decade. Units in which he served include: DECVP; the Office of Operations Evaluation (OED); the Operations Policy and Strategy Vice Presidency (OPS); the Health, Nutrition, and Population Team in the Human Development Network (HDNHE); and the Quality Assurance Group (QAG). McCarthy's last consultancy with the World Bank ended in 2010.

Donated to the World Bank Group Archives by Desmond McCarthy in 2011.

Fonds consists of chronological files compiled by McCarthy that cover nearly his entire career at the World Bank. Fonds also contains reports and articles authored by McCarthy in both draft and published form as well as records related to his attendance and participation in a number of conferences and working groups. Records related to his work for the Quality Assurance Group (QAG) in 2004 and 2005 are also included.