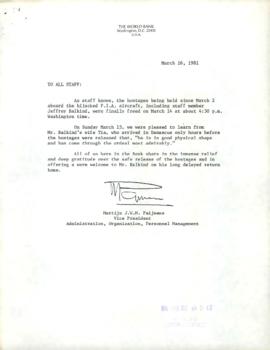 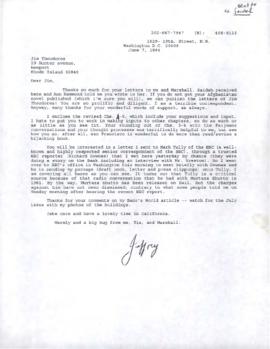 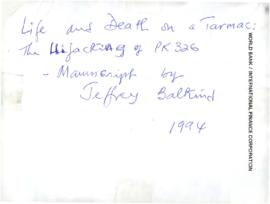 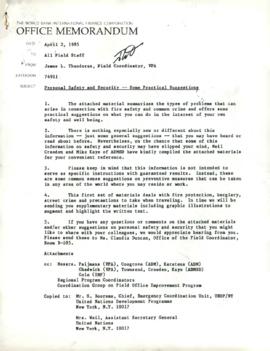 James L. Theodores was born on September 4th, 1922 in Thompson, Connecticut. After serving in World War II, Theodores attended Fitchburg State University in Massachusetts where he completed a BSE in Education. He subsequently completed a Master's degree in Management & Finance from New York University.

Prior to beginning employment at the World Bank, Theodores held a variety of positions related to education planning and management. These included: Superintendent of Schools in Scarsdale, New York; Education Planning, Building and Development Consultant for St. Ceyre Architects in Detroit, Michigan; and Senior Advisor to Colombia's Ministry of Education in Bogota, Colombia. He also published two books in the field of education.

Theodores joined the World Bank in 1970 as an Education Facilities Planner in the Education Department, the primary Bank unit responsible for appraisal, negotiation, and supervision of operational project work in the nascent education sector. Following the Bank-wide reorganization of 1972 that decentralized operational oversight into the new regional vice presidencies (RVPs), Theodores moved into the Education Division of the Europe, Middle East and North Africa Projects Department (EMPED).

In 1977, Theodores was named the Resident Representative for Afghanistan. Situated in Kabul, he held this position until 1980. As Resident Representative, Theodores was responsible for: maintaining liaison between the World Bank and Afghanistan government and presenting the Bank's views to the government; advising the Bank on significant developments in the country; participating in the preparation and presentation of projects for consideration by the Bank; providing information or responding to requests of the Afghan government; and facilitating the work of Bank missions visiting the country.

Following the closure of the World Bank's Kabul office in 1980, Theodores returned to World Bank headquarters in Washington D.C. and was named Senior Management Analyst in the Organization Planning Department (OPD). Theodores was named acting Field Coordinator (FC) in 1981, replacing Lawrence H. Berlin, and was officially named the new FC Coordinator in July 1982. As Field Coordinator, Theodores was responsible for introducing and establishing systems of security for both travelling and resident Bank/IFC staff and their dependents and advising the Vice President, Personnel and Administration (VPA) on field office matters.

Donated to the World Bank Group Archives by the daughter of James L. Theodores in 2015.

Fonds consists of records from Theodores's time as Resident Representative in Kabul, Afghanistan and as Field Coordinator for the World Bank Group. Many of the records in this fonds appear to be a selection made by Theodores either during his time employed at the Bank or upon his departure. Some of the records, such as those relating to Afghanistan after Theodores had completed his time as Resident Representative there, may have been collected by Theodores for personal interest or in support of potential research projects to be undertaken at a later date. A small number of records relating to Theodores's employment with the World Bank or to the history and future of Afghanistan are also included.