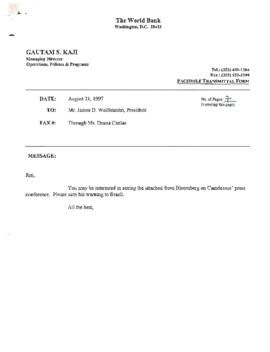 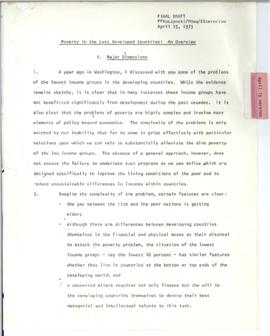 A number of individuals accumulated bodies of records from various offices in which they served. When these individuals retired or resigned from the Bank, these records were transferred to the Archives. Because the records cover the individual's career in more than one office, the records cannot be assigned to a fonds for a single office. Consequently, this fonds is established to describe these records.

Some records in this fonds are duplicates of others found in the Central Files or in fonds for particular offices. Others, however, appear to be absolutely unique. For example, Bernard Bell served as the special representative of the Bank in Indonesia from 1968 to 1972, and when he returned to headquarters, he brought with him some of the records of the Indonesia office. In addition, he made a study for the Bank on contract before he was hired as a regular staff member, and materials relating to the study are also found in the records. In another instance, Leonard Rist was interested in the historyof the Bretton Woods agreement, and collected duplicate copies of documents relating to it. When Rist retired, the Archives received both his correspondence files from different offices in which he served and the collection of Bretton Woods items.

Researchers interested in the offices in which these individuals served should review the sub-fonds descriptions on the records.