Fonds - Records of the Office of the Historian

Fonds - Records of the Office of the Historian 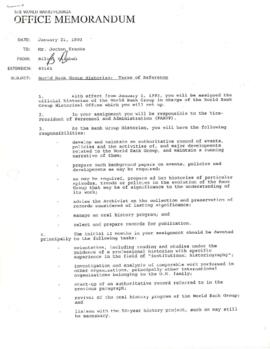 Records of the Office of the Historian

Office of the Historian

The Office of the Historian was established effective January 1, 1993 as part of the Personnel and Administration Vice Presidency and disestablished in 1998. Its mission was to develop and maintain an authoritative record of events, policies and the activities of, and major developments related to the World Bank Group, and maintain a running narrative of them; prepare such background papers on events, policies and developments as may be required; prepare ad hoc histories of particular episodes, trends or policies in the evolution of the Bank Group that may be of significance to the understanding of its work; advise the Archivist on the collection and preservation of records considered of lasting significance; manage an oral history program; and select and prepare records for publication, according to the Office's terms of reference (January 21, 1993; File #30190066). The Historian's Office also played an important role in managing the Bank's relationship with the Brookings Institution, which was commissionedto write a history of the Bank. In 1998 the continuing functions of the Office of the Historian, including the oral history program and the maintenance of a chronology of Bank activities, were transferred to the World Bank Group Archives.

The records of the Brookings Institution World Bank History Project were transferred to the Office of Historian following the 1997 publication of the project's two volume history of the Bank, The World Bank: Its First Half Century. When the Office of the Historian closed, both the Historian's office records and the project records were transferred to the World Bank Group Archives. The Historian's office files on the oral history program, which was taken over by the Archives, were integrated into the activerecords of the Archives; those records are not part of this fonds. In addition, some of the background research materials assembled by the Brookings project were incorporated into reference files existing in the Archives and are not part of this fonds.

Office of the Historian.

Because of the broad scope of the work of the office, which was essentially the entire history of the Bank, the records are extremely varied. They include: written reminiscences, solicited or volunteered, by former Bank staff members; drafts of various publications, both Bank and non-Bank; commentaries on drafts, discussing the commenters' views of particular issues and events; and background research materials used by the World Bank History Project.

The largest body of original source material in the fonds is the set of interviews conducted by the World Bank History Project authors as part of their research for the two-volume The World Bank: Its First Half Century. Typed notes are the only record of some interviews, but most interviews have both the tape of the interview and a transcript.

Records are arranged in five series and one sub-fonds: