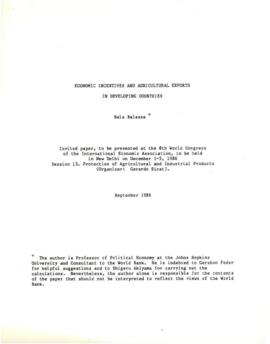 Included are Balassa's completion reports for some of the projects he personally carried out, his comments on proposals and research projects conducted by others in the Bank, and correspondence with the Research Projects Approval Committee (REPAC) and the head of the Research Administration Unit in VPERS. Some files contain background materials, including statistical data, used in Balassa's research. Specific documents include: Terms of Reference (TOR) for a May-June 1983 mission to Tunisia led by Balassa that constituted the first phase of a study on employment creation; his TOR and Back-to-Office (BTO) Report for a January 1985 Industrial Policy Mission he led to Tunisia; and his report on his coordination of a Latin American development strategy study (introduced by David Rockefeller) while on leave from Johns Hopkins University. Correspondence, including a BTO Report, for a mission to Venezuela Balassa led from January to October 1987 to hold discussions with the Venezuelan government on the economy and possible resumption of Bank lending is also part of the series.

Also included in the series are copies of talking points and papers Belassa prepared at the request of high-level Bank officials and correspondence with DECVP. Belassa's handwritten notes and drafts can be found throughout the series.

Records are arranged by project.