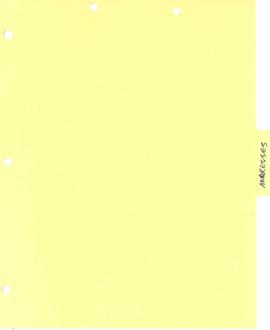 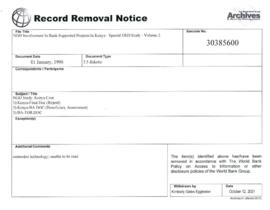 The sub-series contains the working files for special studies generated by the Sector and Thematic Evaluation Division (OEDST) as well as some records of its predecessor, the Agriculture and Human Development Division (OEDD1).

Much of this sub-series consists of files relating to the preparation of papers concerning NGO involvement in World Bank-Supported Projects in Mali, Kenya, Bolivia and Brazil. These papers were part of five country case studies (covering India in addition to Mali, Kenya, Bolivia and Brazil) prepared as background papers for the OED study: Nongovernmental Organizations in World Bank-Supported Projects: A Review (1998).

Other studies covered in this sub-series include: Information Infrastructure: The World Bank Group's Experience (2001); The Bank's Assistance to China's Energy Sector, An OED Country Sector Evaluation (2001); Toward Sharpening the Focus on Rural Poverty: A Review of World Bank Experience (2002); Private Sector Development in the Energy Sector: A Review of the World Bank Group's Assistance (c. 2001); The Impact of Dairying Development in India: The Bank's Contribution (c. 1997); Meeting India's Energy Needs (1978-1999): A Country Sector Review (1999); and Education in Bangladesh: A Country Sector Review (1999).

There are fragmentary files for a sub-series of health studies that are not as complete as most of the working files. Evaluation Health Projects: Lessons from the Literature was developed by the Agriculture and Human Development division (OEDD1) in l995-1997. Theother health studies were generated by OEDST, including: An Analysis of Combating Iodine Deficiency: Case Studies of China, Indonesia, and Madagascar (2001); Supporting a Healthy Transition: Lessons from Early World Bank Experience in Eastern Europe (2002); and Case Study of World Bank Activities in the Health Sector in India (1998-1999).

This sub-series also contains the working files for a 1996 OEDD1 Performance Audit Report (PAR) for the project Brazil: Science and Technology Project (Loan 2489-BR). Inaddition, there are files for The Next Ascent: An Evaluation of the Aga Khan Rural Support Program (AKRSP), 2002, which was part of a series of evaluations of AKRSP conducted by OED at the request of and with funding from the Aga Khan Foundation.

Original file arrangement has been maintained. Files are arranged by study subject or title.