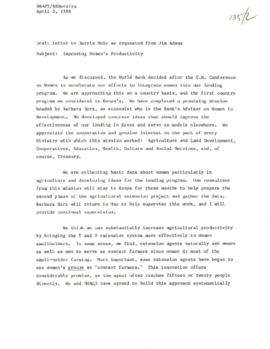 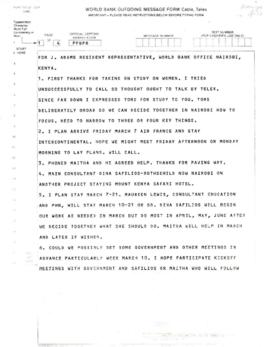 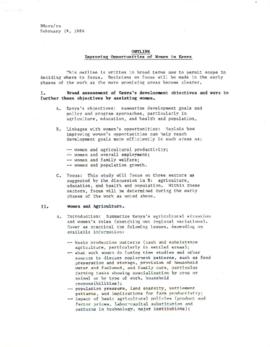 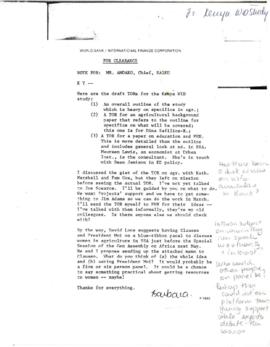 This series includes numerous subject files of WID Advisers Gloria Scott and Barbara Herz, related to the various activities and responsibilities of the WID Adviser position. The subject files consist of correspondence and memoranda focused on a specific topic. The records include some of the following subject files: responses to external request for information; records detailing WID functions and activities; background information on WID policies, sector studies, and case materials; WID project efforts in West Africa; staffing of WID; press releases related to WID; revisions to a WID "Q and A" booklet; briefing books for the WID Adviser; workshop papers and training manuals; back-to-office reports on mission projects from 1985 to 1987; World Bank Projects and Women Report, 1979; proposed WID work program from 1984 to 1987; budgets for WID work program from 1984 to 1985; reference file on Economic Development Institute (EDI) activities; status of WID work in the World Bank; and planning of sector strategy papers.

The series also includes correspondence and memoranda records regarding preparation of a World Bank statement and WID paper by WID Adviser Gloria Scott to be presented to U.S. Senator Charles Percy and his Foreign Relations Committee in 1984.

The series additionally contains a correspondence file documenting WID Adviser Gloria Scott's involvement with the Margaret McNamara Memorial Fund, a program run by the World Bank Volunteer Services, which assists female students from developing countries with financial aid for their studies in the United States.

The series also consists of correspondence, recipient lists, and final drafts related to Gloria Scott's publication: "Recognizing the 'Invisible' Woman in Development: The World Bank's Experience" from 1979 to 1980.

This series also includes country strategy papers. The country strategies papers were proposed by Barbara Herz in late 1985 as part of larger framework to put WID policies and studies to action in World Bank operational development projects. The country strategies papers included a detailed country-focused assessment of women's issues, and an action plan to address these issues. The records include: correspondence; memoranda; proposals; budget records; studies; and terms of reference regarding a planned country strategy papers for the countries of Kenya and Indonesia. A portion of the country strategies correspondence and memoranda are between WID Adviser Barbara Herz and Senior Vice President of Operations Ernest Stern. Records related to recruitment of consultants, development of an East Asia task force, and task charts prepared by WID task managers are also included.

Lastly, the series consists of records related to the Safe Motherhood Initiative. The Safe Motherhood Initiative was a multi-agency international initiative focused on maternal health and family planning issues of women. The World Bank sponsored the initiative, and the WID Adviser and the Population, Health, and Nutrition Department (PHN) helped plan and organize. The Safe Motherhood Initiative was launched in February 1987 at a conference held in Nairobi Kenya. The records from the Initiative in this series pre-date the conference from 1985 to 1986when Barbara Herz served as WID Adviser. The records consist of: correspondence; memoranda; terms of reference; outline work plans; outline plans for a senior technical conference; and consultant recruiting records related to the Initiative. Some of the correspondence is between the WID Adviser Barbara Herz and medical professionals at the Center for Population and Family Health and the Women in Development Office of the Swedish International Development Authority (SIDA) regarding funding to develop a concept paper for the Initiative. Correspondence and memoranda between Herz and the Projects Policy Department (PPD) Director and other staff are also included. The Initiative records also contain reference material including reports, studies, and articles produced by the Bank and external agencies, which are related to maternal health.