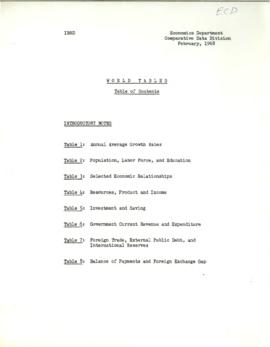 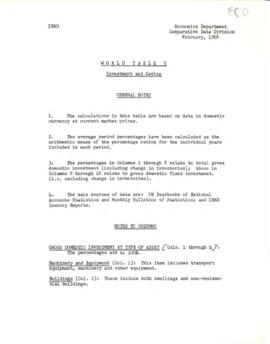 The earliest World Debt Tables in the series were prepared by the Comparative Data Division, Economics (later Economic Program) Department. The tables were developed from data received from deBTOr countries supplemented by data from other sources. These tables were periodically updated and supplemented; data used in some updates are part of the series. The Economic and Social Data Division, Economic Analysis and Projections Department of the Development Policy Staff succeeded the Comparative Data Divisionin issuing World Debt Tables.

Included in this series is the first World Economic Indicators report that was transmitted with a November 2, 1973 explanatory memo from Bank President Robert McNamara. The purpose of the report was to assemble data for use by Bank senior staff and the Board relating to major trends in the world economy and to describe major features of the economic situation in developing countries.

Records are arranged by type of report and thereunder in general chronological order.