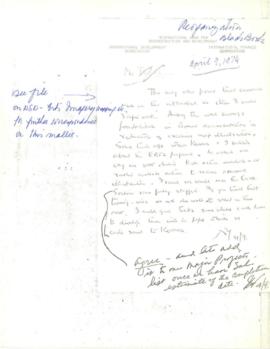 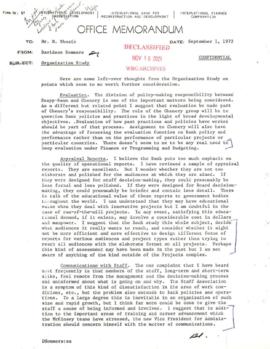 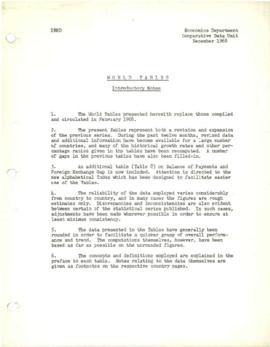 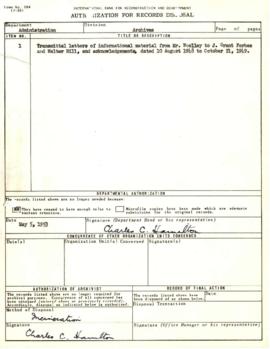 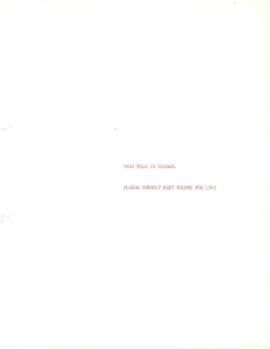 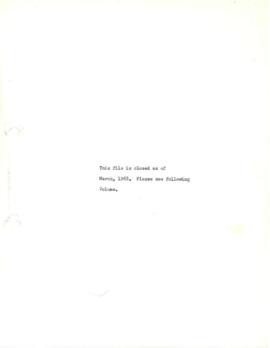 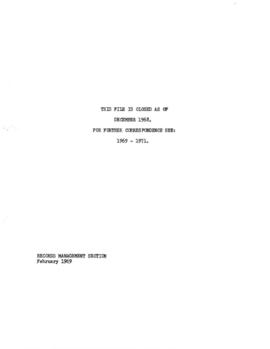 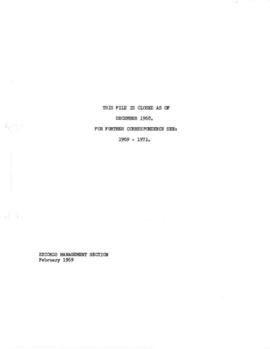 Records were maintained in the Central Files recordkeeping system by the Records Management Section where they were arranged into the Bank-wide classification schemes. To create room for the increasing volume of records in the Central Files, the pre-1966 files were sent to a records center close to the Bank premises in 1969. With the formal opening of the Archives repository in 1980, the Records Management Section began to transfer files to the Archives. Central Files had been renamed the Bank Administration and Policy (BAP) Records Station followed by the Non-Regional Information Center (NRIC), and in 1982, the administrative records managed in the NRIC were removed and incorporated in the Administrative Services Directorate Information Center (ASDIC). While a selection of the NRIC administrative records dated 1977 and later continued to be maintained in the ASDIC with the Administration Department front office and other records, most of the inactive administrative records forming part of this Central Filesfonds were transferred to Archives.

Records originated in the departments and offices whose files were centralized over time including, but not limited to: Administration; Organization and Planning; Development Services Department; Controller's Department; Program and Budgeting; Information Solutions; and the Office of the President and Office of the Vice President whose files were centralized until 1968. Although Secretary's Department records were considered specialized according to the Administration Manual and were decentralized beginning from 1947, there is a significant volume of correspondence between the Secretary's Department and other centralized departments in this series. The types of records comprising the series include internal memoranda occasionally filed with accompanying Board or committee reports and other internal reports and drafts, as well as cables, incoming and outgoing letters, minutes of meetings and proceedings, copies and drafts of contracts and agreements, press releases, press clippings, external reports and articles, and architectural plans and drawings.

The series contains records related to the organization and procedures of theBank as well as the establishment of its departments and subordinate offices. A small volume of files related to the President's Office and Vice President's Office (1947 - 1971) document general and personal activities and congratulatory letters, as well as two files regarding the organization of the President's Council (1969 - 1968) and subjects for discussion at the council meetings, together with organizational charts and bulletins. The records also document Bank-wide reorganizations as well as work programs, budgets, staffing requirements, internal relations, and activity reports of various Bank departments and divisions from 1946 to the 1970s including: Administration, Economic Department, Loan Department, Legal Department, Development Services and its successor Information and Public Affairs, Technical Operations and its successor Projects Department, Programming and Budgeting, Technical Assistance and Planning Staff, Secretary's, and Treasurer's. Several files relate to the organization of the Bank's early economic research program as well as meeting summaries and monthly progress reports of the Loan Department and Economic Department and its' sector division staff. These department files mostly contain memoranda that is occasionally attached to administrative circulars announcing staffing assignments and organizational changes, press clippings, or other records. A few files in the series relate to Economic Development Institute (EDI) administration, inquiries, and library project (1969 - 1971). Field offices files document administrative procedures for the setting-up and operations of offices. Correspondence is mostly between the Bank's representatives or field office staff, and senior management and staff at headquarters. The more substantive letters in the representative files describe the economic situation in the countries. Field offices files include the following record date ranges: Paris Office, also referred to as the European Office, first opened in Europe (1947 - 1979), New York (1947 - 1971), Beirut (1952 - 1954), London (1956 - 1979), Geneva (1965 - 1968), Copenhagen (1969 - 1971), and Treasurer Department's various offices in Europe (1947 - 1949). A small number of resident mission files (1969 - 1980) mostly relate to the offices' functions, leasing of premises, and other administrative matters.

Other records in the series document policies and operations of the Bank's administrative and support services such as: records management and the maintenance and disposition of World Bank records and official documents; Joint Library and Legal Library; internal audit; translation and document printing services; communications; the use of devices and computers; and data processing.

Series also contains records related to the Articles of Agreement and By-Laws of IBRD and IDA (1946 - 1971). Included are: internal memoranda; cables; copies of the Articles including in French and Spanish; printed by-laws; drafts and official Board documents and decisions; reports of the Committee on Interpretations and Committee on Procedure; and correspondence concerning the interpretation and amendments of these instruments as well as the IFC Articles of Agreement and Charter; and voting of countries on the articles and by-laws. Other files concern the IBRD, IDA, and IFC budget (1948 - 1971) language (1950 - 1968), and seals (1956 - 1965).

There are records such as internal memoranda and reports, United Nations resolutions and minutes, UN Economic and Social Council (ECOSOC) reports, press clippings, and speeches related to the history and inauguration of IFC (1956 - 1974), history of the Bank, and history projects such as the Brookings Institution publication and oral history planning (1942, 1944, 1947 - 1974). There is a single file related to the origin of IDA, labeled as General Counsel "Mr. Sommers' working file on IDA" including legislation, summaries of President Black's meetings, statements of Board of Governors, and country member notes on the IDA proposal (1959 - 1960). Also included is a list of bibliographic sources from pre-Bretton Woods period. The 1942 and 1944 documents are copies of outlines and draft "Proposal for a Bank of Reconstruction and Development of the United and Associated Nations" by the United States Treasury research department. Also includes correspondence regarding the planning of anniversary celebrations (1956 - 1971), draft statements, and press coverage booklets of the tenth and twentieth anniversaries of IBRD (1966).

Donations and organizational membership records in the series (1956 - 1968) relate to policy discussion about Bank financial contributions to international and local institutions, professional societies, as well as club memberships and membership dues.

The series contains a substantial volume of records concerning the preparation and amendment of directives and manuals that set out the policies, procedures, and standards for the overall management and administration of the World Bank from 1946. Includes correspondence and statements regarding the preparation of the Administrative Manual, Organizational Bulletin and Policies and Procedures Statements (1947 - 1966), IFC Administrative Manual (1956 - 1966), Basic Documents Manual (1961 - 1971), and Organizational Manual (1966 -1971). There are also sets of the Administrative Order and Information Circular (1946 - 1947), Administrative Circulars (1947 - 1974) and Weekly Bulletins (1965 - 1971), and related memoranda. The Weekly Bulletins replaced the Information Bulletin in December 1952 and were prepared successively by the Administrative Planning Division, the Organization and Procedures Division (1970), the Administrative Services Department's Document Services Division (1972), and Information and Public Affairs (1973). There are also copies of the Development Services Department newsletter (1969 - 1971).

The series contains memoranda and other records concerning agreements (1949 - 1975) of an administrative nature such as cost-sharing between IBRD and IDA, Bank and IFC, and between the Bank and International Monetary Fund (IMF). Other agreements pertain to library services of the Joint Library and the Legal Library, United Nations and the Bank, and leasing of space and office rentals. There are also records related to authorized signatures for written instruments.

Series contains correspondence, copies of contracts, building and floor plans, technical drawings, and other records relating to the acquisition, construction, and maintenance of World Bank Group buildings and management of premises in Washington, Paris, London, and New York (1949 - 1977). There are several files documenting the construction of the Bank "D" building at 1809 G Street, Washington. Also included are New York office plans dated 1963 and reproductions of 1937 plans.

Series also contains records related to Bank assets such as vehicles and apartments and facilities for Economic Development Institute (EDI) participation, insurance coverage of buildings and vehicles, as well as other administrative files on office services, conference rooms and cafeterias, maintenance contracts, office space and security, parking facilities, and the creation of the Bank-Fund Credit Union.

There are also records related to general staff services and policies, financial assistance, privileges and immunities, taxation including Bank staff exemptions, travel policy and travel services, retirement plan, staff health and welfare, insurance coverage, and the Staff Association. Includes privileges and immunities files for IFC (1955 - 1968). Other files deal with contributions to charity, allowances for official entertainment, and policy regarding the acceptance of gifts, civil defense, and other matters.

Series also contains a small portion of reports, correspondence, and other records relating to varied topics including: studies of the Bank's organization and procedures conducted by General Counsel Davidson Sommers (1962 - 1966) and Vice President Mohamed Shoaib's Study Committee (1966 - 1967); the Bank's involvement in the establishment of the Washington International School (1969 - 1971); public relations (1972 - 1974); and copy of the report "The International Bank for Reconstruction and Development, 1946 - 1953".

Arrangement follows the original order instituted in the centralized General Files (1946 - 1968, later Central Files). Files are mostly arranged alphabetically, by subject. A portion of files maintained in the renamed Bank Administration and Policy Records Station (BAP) from 1972 to 1974 included a grouping of records classified as "Alphabetical files". The files were reviewed during archival arrangement and the sub-groupings that are administrative in nature, including "Personnel" and "Internal administrative matters" are arranged as part of this series which also follows the original arrangement of similar files, as established in the General Files. The "Meetings and Missions" sub-grouping of files that were also classified under the Alphabetical files "series" are now arranged as part of the Operational policy and procedures (WB IBRD/IDA ADMCF-04) series and "General A-Z" have been arranged in the Liaison with external organizations (WB IBRD IDA ADMCF-08) series.