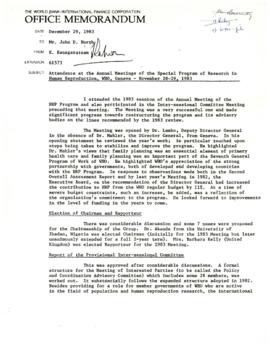 Prior to the practice of direct records' transfer to the Archives in the 1990s, departments and Vice Presidencies, including those responsible for external affairs functions, transferred their records to the Bank's centralized filing unit where they were arranged into Bank-wide classification schemes. These records were later transferred into the custody of the Bank Archives.

This series contains records relating to the World Bank's liaison with external organizations. Records in this series originated in the various units responsible for liaison with external organizations in the External Relations department/vice presidency. However, due to records management practices in the Bank between 1946 and 1978, some of the records in this series originated in departments other than those focused exclusively on liaison activities. This is described in more detail below. Also note that, beginning in 1987, most of the liaison functions in the Bank were removed from the External Relations vice presidency for two brief periods: 1987 to 1990, and 1993 to 2002. Please see the Administrative History field in the Records of the Office of External Relations fonds description for more information on the organizational history of the liaison function in the Bank. Also see the Related Units of Description field below for the location of those post-1987 records related to the liaison function created in units outside of External Relations that are not contained in this series.

This series consists of records that were classified as "liaison files" or "United Nations liaison files" in the Bank's 'General' or 'Central' filing systems. These records date from 1946 to 1978 (with the exception of 1969 to 1971; please see Related Units of Description below). While records classified in this manner originated in departments from across the Bank (including the Office of the President), the majority of the 'General' and 'Central' files originated in the Technical Assistance and Liaison Staff (TAL, 1946-1961), Development Services Department (DSD, 1961-1973), and International Relations Department (IRD, 1973-1978).

Note that, from the beginning of the Bank's General Files classification system in 1946, "liaison files" and "United Nations liaison files" were classified separately. This likely occurred because the Bank's relationshipwith the UN and its agencies was more involved than with any other external organization. In 1964, as the Bank's collaboration with the UN in fields like agriculture and education was increasing, the Bank created a separate position called the Special Representative to the United Nations within DSD separate from staff responsible for liaison with non-UN external organizations. In 1965 the Special Representative moved to New York and opened an office at the United Nations headquarters. In 1978 a second World Bank UN Office was opened in Geneva, Switzerland.

The most common correspondence in this series are invitations to or requests for participation in meetings, conferences, seminars, workshops, training courses, and similar events. In addition to correspondence with external organizations, records related to event participation and coordination also include internal memoranda, Terms of Reference, back-to-office reports, meeting agendas, conference programs, and press releases.

Records relating to collaboration or partnership on joint projects, research, and missions are also common, particularly in those records relating to the UN and its agencies. These records are generally limited to work program development, information sharing, and logistical planning. The records also relate to the exchange of information (including mission schedules, policy proposals, sector studies, etc., most of which are not included with the correspondence), and request for comment.

The Bank-wide 'General' and 'Central' filing practice was discontinued in 1978, and a new Non-Regional Information Center (NRIC) was created to manage records created by non-operational units including the External Relations' International Relations Department (IRD). Unlike the records of the 'General' and 'Central' files, records from the NRIC, which existed from 1978 to 1986, and those subsequently transferred to the World Bank Group Archives directly from units responsible for external liaison include only those that originated in units responsible for the function. The exceptions are those records that were shared with these departments by other Bank units. Note that most of the records relating to external liaison that were created while the external liaison function was housedoutside of the External Relations Vice Presidency from 1987 to 1990 and 1993 to 2002 are included. To locate those arranged in other fonds, please see the Related Units of Description field below.

Topics contained in the NRIC and subsequent records are similar to those in the 'General' or 'Central' files, but with some additions. Beginning around 1980, the Bank's engagement with non-governmental organizations (NGOs) intensified. Records relating to the Bank's communication and collaboration with NGOs as well as the development of policy for interacting with NGOs are contained in this series. Likewise, records relating to the Bank's interaction with civil society also become more numerous throughout the 1980s and 1990s.

Records relating to external meeting and conference attendance are also included as are records related to external liaison staff's participation in World Bank Group spring and annual meetings. Background and briefing materials for senior Bank management prepared by EXT units responsible for meetings with external organizations are contained in this series. Many of these briefing materials were prepared for World Bank Group presidents Lewis Preston, James Wolfensohn, Paul Wolfowitz, and Robert Zoellick. Finally, a small amount of records relating to the organization and management of the units responsible for external liaison over time, including the New York and Geneva offices, are contained in this series. These records primarily relate to staff retreats where strategy and work programs were developed.

Records relating to the Bank's European field office in Paris, France, are also included in this series. The records date from 1949, when Drew Dudley, Director of Public Relations for Europe, arrived in Paris, to 1980. The records of the European office relate to its primary role as Bank representative to European governments, central banks and other financial institutions, international organizations, and the European media, academic institutions, and business community. Records also relate to other activities, including the arrangement for the sale of Bank securities in Europe, carrying out information programs, and performing administrative functions. Records consist of correspondence with Bank staff, including Bank presidents, in Washington, DC. Topics include logistical matters, reports on meetings, and exchange of information.

The series also contains records from 1983 to 1987 relating to general policy and analysis undertaken by IRD in support of liaison with NGOs and other external organizations. Records relate to food security, poverty, debt, and the environment and contain reports, internal memoranda, communications with external organizations, logistical plans for meetings, and back-to-office reports.

The series also contains thematic subject files created and used by EXT units responsible for liaison with external organizations. Topics include gender, human rights, indigenous peoples, partnerships, structural adjustment, private sector investment, etc. These types of records generally date from the 1980s through 2010 and contain a variety of materials, such as: correspondence and internal memoranda; conference materials; and external publications.

The records of the World Bank's Grant Committee are also contained in this series. In 1981, the Bank's system for making grants to development institutions and conferences was streamlined and consolidated within the External Relations Department. From 1981 to 1987, IRD provided the staff for the roles of chairman and secretary. Records include meeting minutes, internal memoranda, and correspondence with external organizations relating to their requests for funding. Records date from 1981 to 1987 and 1990 to 1993.

Records related to the Robert S. McNamara Fellowship Fund are also included in this series. The fund was proposed in 1981 and awarded its first fellowships in 1983. Records relate to the setting up of the fund, raising funds from Bank members, the establishment of a selection committee, and the awarding of fellowships. Records date from 1981 to 1986.

Original order of the folders has been maintained.