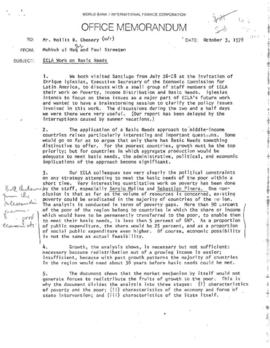 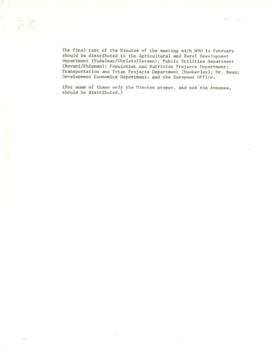 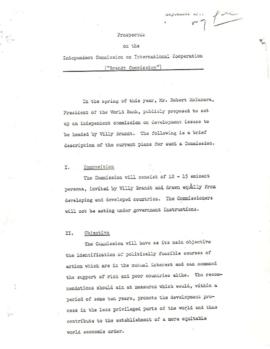 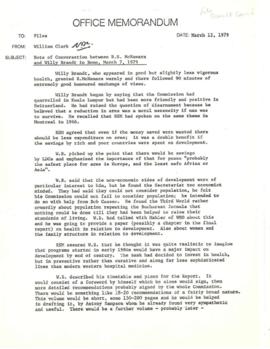 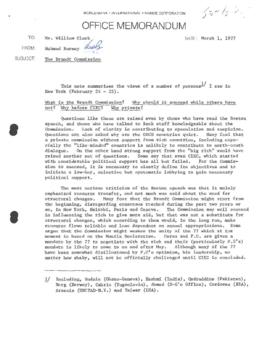 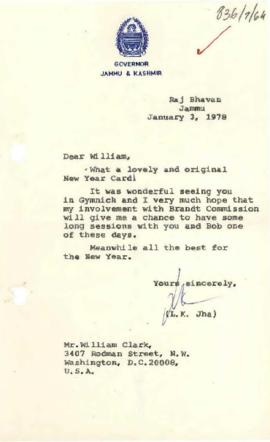 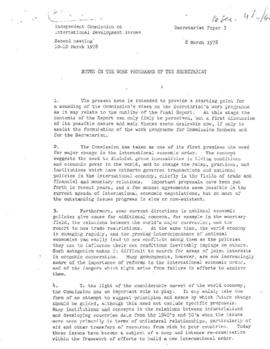 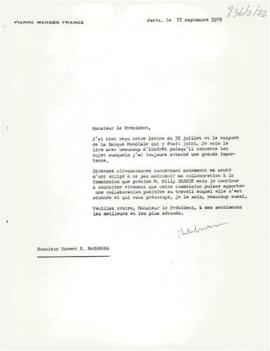 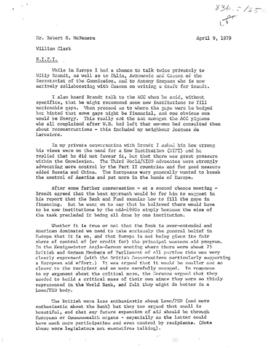 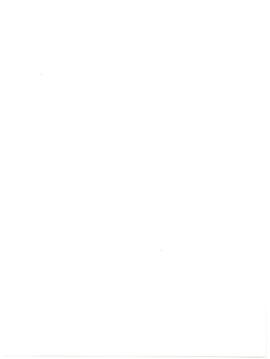 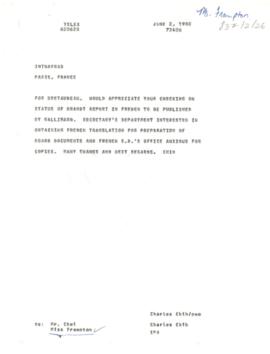 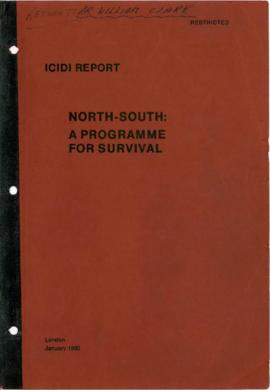 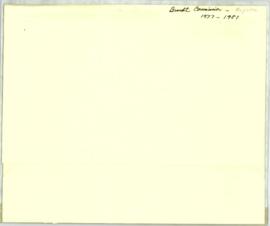 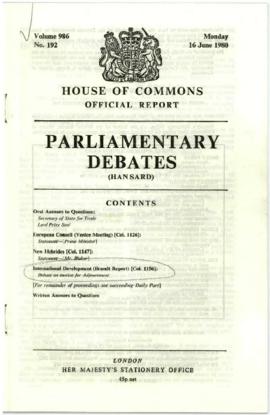 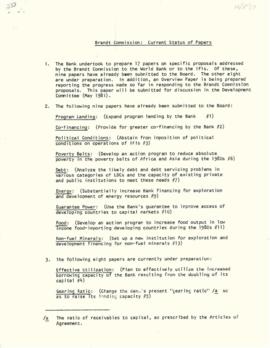 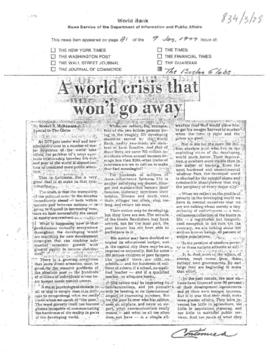 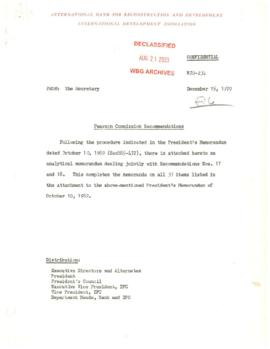 Office of the Director of International Relations files and Pearson and Brandt Commission records were transferred to the Archives by the responsible External Relations units in the 1990s. 'General' files were maintained by the Non-Regional Information Center (NRIC) that was established in 1978 to manage the records created by non-operational units including External Relations' International Relations Department (IRD); this portion of General files was sent to the Archives in 1994. Vice Presidents' chronological and subject files were transferred by the External Relations Office of the Vice Presidency (EXTVP) in accordance with approved records retention and disposition schedules.

Records include the chronological files of Mark Malloch Brown, 1994 to 1999, while he was first Director of External Affairs (1994-1995) and then Vice President when EXT was elevated again to a Vice Presidency in January 1996. Chronological files of Brown's successor, Vice President Mats Karlsson, date from 1999 to 2001. Both Vice Presidents chronological files contain copies of outgoing memoranda, letters and printed emails, often with attached incoming letters, facsimiles, reports and external documents. Many of the files also contain the Vice Presidents' handwritten notes and drafts of replies. Correspondence addressees include Managing Director Sven Sandstrom and other Bank senior staff as well as representatives and senior officials of various United Nations (UN) agencies and other international organizations. Chronological files document the day to day management of the Bank-wide external relations program, including the arrangement of speaking engagements and meetings, notes and statements drafted for President Wolfensohn, and cooperation with UN agencies including comments on external papers and collaboration on development operations.

With one exception, the subject files in this series were created beginning in 1984. The files between 1984 and 1994 were created primarily by Alexander Shakow while he was Senior Adviser, International Relations Department (1984-1987) then Director, Strategic Planning and Review Department (SPR) (1987-1990) until SPR's termination in 1990 after which Shakow became Director of External Affairs Department (EXT) around July 1990. A small portion of the subject files from this period were also created by the International Relations Department (IRD) Director's Office under Shahid Javed Burki and IRD's United Nations Affairs unit.

EXTVP subject files cover the broad range of the office's responsibilities and are filed by organization or institution, country, region, issue or theme. Files document activities including: the front office's comments on papers; information about Bank and joint meetings; the Vice President's advice and support to the Bank President regarding Bank publicity; development of communications strategies and communication plans including responses prepared for the Bank on sensitive or politically-charged topics and planning and execution of campaigns on Bank-wide issues and outreach; writing, or clearance, of letters to the editor of major publications relating to articles involving the Bank; internal communications products such as Bank's World, and communications support for the Bank-wide change initiatives; internal publications; film and video projects; administration and organization of EXT and its units; Annual Meeting preparations and drafting of the meeting speech for President; and the Bank's relationships with UN institutions including United Nations Development Program (UNDP), United Nations Exchange Program, United Nations Foundation, and other intergovernmental or international institutions such as International Monetary Fund (IMF), International Labor Organization (ILO), World Trade Organization (WTO), Oxfam, and non-governmental organizations (NGOs). The more voluminous subject files includecorruption, dams and the World Conference on Dams, IDA lending and replenishments, poverty, debt and the Heavily Indebted Countries Initiative (HIPC), Group of Seven (G7) summits, the Chad-Cameroon pipeline project; and planning of events and publicity for the Bank's 50th anniversary in 1994.

Subject files also document the Vice President's input provided to the Bank President and drafting of statements or letters to be sent by the President, or briefing material for the President or occasionally Managing Directors.

Correspondence between EXTVP and EXT European and Tokyo offices primarily relates to visits of delegations, summaries of meetings attended by Bank President or EXT senior staff, relations with external organizations, feedback from member countries (on IDA and G7), and the Bank's coverage in the press or summaries of press conferences attended by EXT personnel.

There are also files relating to EXTVP retreats that took place in 1996 to 1997 and a 1988 press briefing speech by EXT Director Francisco J. Aguirre-Sacasa, as well as five photographs of World Bank-Switzerland signing agreement in April 1997 attended by President James Wolfensohn.

Among the earlier records of the series are those of William Clark who served as Director of Information and Public Affairs from 1967 to 1973 while reporting to the Development Services Department (DSD) and then as Director of External Affairs from 1973 to 1974 in the newly established External Affairs Staff (ERS) complex following the Bank's 1973 reorganization. When External Affairs was elevated to the status of a Vice Presidency in 1974, William Clark was promoted to Vice President, External Affairs (VPE). Clark's records relate to the Pearson Commission on International Development from 1968 to 1970 and include correspondence on the selection of Commission members, copies of statements of various national and international development agencies, as well as a copy of the President's memoranda on the report's recommendations.

Clark's records related to the Independent Commission on International Development Issues, also known as the Brandt Commission, date from 1976 to 1981. The records primarily contain chronological files of memoranda, letters and cables between the organizers and candidates/members of the Commission, as well as press clippings, reports and notes on conversations and meetings. Clark's Brandt Commission chronological files are accompanied by several subject files on the establishment and membership of the Commission; public reaction to its establishment; the Bank's follow-up on its conclusions, including lists of Commission proposals to be reviewed by the Board (some of which are heavily annotated by Bank President McNamara); and correspondence handled by Clark for President McNamara.

The series also contains records of the International Relations Department (IRD) Director's Officepredominantly dating from 1973 to 1983 during Director Shirley Boskey's tenure. Records created by Boskey's predecessors, Richard H. Demuth, Director of Development Services Department (DSD) dating 1965 to 1973, and Michael Hoffman, Director of IRD from 1973 to 1975 are also included. The records of Directors Boskey, Hoffman and Demuth are mainly comprised of subject files related to the management of the Bank's relationships with intergovernmental organizations and international institutions, primarily UN institutions (including the United Nations Development Programme [UNDP] and the International Labour Organization [ILO]) on development issues, meetings, arrangement of visits, comments on UN papers; and internal meetings attended by the Director. There are also several files dating from 1969 to 1970 and 1978 related to the Organisation for Economic Cooperation and Development (OECD) Development Assistance Committee (DAC) and its working parties, in which the Bank and the International Monetary Fund (IMF)were observers. Correspondence contains copies of outgoing memoranda, letters, and telexes, and is often filed with: minutes or summaries of external meetings; reports and proposals intended for presentation by Bank staff; annotated copies of draft speeches or letters to UN officials prepared for Bank President McNamara along with the original addressed to President; articles; and Boskey's handwritten notes. There are also copies of memoranda and letters on which the Director was copied, particularly regarding the Publication Committee chaired by the Vice President of External Relations.

The series also contains separate chronological files of Assistants to the Development Services Director, Max Ebstein (1972, 1974) and Pastor B. Sison (1972 to 1975), and consist of copies of memoranda and cables.

Also included in the series is a small number of 'General' correspondence files including outgoing memos and letters written by Special Advisor Peter L. Chatenay on behalf of the IRD Director to other IRD staff, Bank staff or external addressees including UNDP. Correspondence relates to meetings of the President, dignitary visits, UNDP projects and financing and Bank-UN relations.

Original order established by the creator was maintained.

Records are subject to the World Bank Policy on the Disclosure of Information.