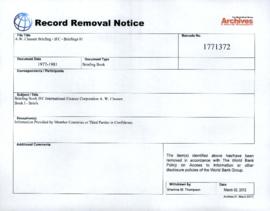 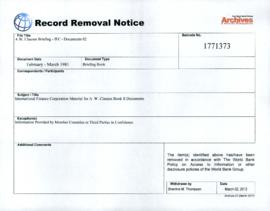 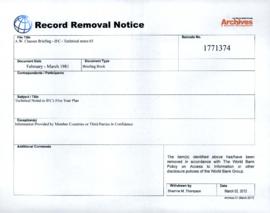 The files were transferred to the Archives as separate items and file units. The Archives grouped them into a subject files series.

This series contains some significant material on the increase of IBRD capital, the IDA VIth replenishment and the Brandt Commission. Most of the other files concern issues that President McNamara was dealing with at the end of his tenure: FY82 budget, maintenance of value, the PLO observers issue, China's membership, the establishment of an energy affiliate, and the briefing of A.W. Clausen. They often consist of background material, sometimes annotated by McNamara.

Among the materials concerning the IBRD capital increase, a file on the President's paper to the Board, Future role of the World Bank and its associated capital requirements (31 January 1977), includes McNamara's handwritten notes and drafts of memoranda on the informal meetings held with the Executive Directors to discuss the paper, minutes of the informal meetings, Programme and Budgeting J. Wood's IBRD Capital Increase Proposal and other internal memoranda, with annotations by McNamara. There are also minutes of McNamara's discussions with Kuhn Loeb partners and the U.S. Treasury.

The Brandt Commission file concerns the creation of the Independent Commission on International Development Issues. It contains McNamara's correspondence with Chairman Willy Brandt and Treasurer Jan P. Pronk, Secretary of the International Development Center David Hopper, Director of the Aspen Institute Harlan Cleveland, and Commissioners Edward Heath and Katharine Graham on the announcement, organization, work, and final report of the Commission. The file contains also two sets of McNamara's handwritten notes of and for conversations with Brandt, Hopper, Cleveland, Executive Directors, and Vice-President of External Affairs William Clark; and his drafts, or annotations of drafts, of the terms of reference, announcement and final report of the Commission. The rest of the file contains Clark's reports on his early 1977 conversations in Europe, McNamara's meetings with Brandt, and the progress of the launching of the Commission, as well as other internal memoranda on McNamara's proposal, the reactions of the Less Developed Countries (LDC) Executive Directors and members of the Group of 77, and the Bank's response to the recommendations of the Commission. Two photographs of Willy Brandt, Katharine Graham, and Shridath Ramphal, Secretary General of the Commonwealth, at the presentation to McNamara on 13 February 1980 of a copy of North-South: A Program for Survival are included.

An item list for the folders entitled Role of the Bank is included in the first volume (Archives folder #1771455). This item list was prepared by Blanche Moore, McNamara's former secretary, after the close of the McNamara presidency and includes: type of document (e.g., memo, cable), correspondents, date, and sometimes topic and length. Please note the Archives cannot confirm the accuracy of the list prepared by Ms. Moore.