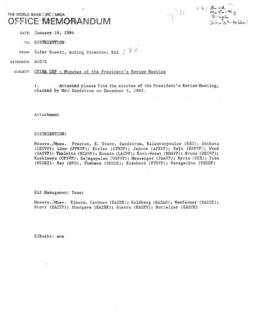 The small number of items dated prior to the 1987 Reorganization and the establishment of EAS are primarily only copies of Country Program Papers, Special Country Program Papers (SCPPs), or Country Program Notes (CPN) and copies of Postscripts of Operations Policy Subcommittee reviews of CPPs; there are very few memoranda discussing drafts or commenting on the CPP/CPN content. The document copies were forwarded to the Vice President for Development Policy (VPD) and to units within VPD: the Policy Planning and Program Review Department (DPP) and the Program Review Division (PPPR); to the Economics and Research Staff (ERS); and to the Country Policy Department (CPD) in the Operations Policy Complex (OPS).

The more complete files in this series cover the period from 1987 to 1994 and contain records documenting the entire CSP/CAS drafting and review process and the input of EAS/DEC staff into that review process: a draft Initiating Memorandum (IM) or brief prepared by Regional staff and comments on the draft IM from units throughout the Bank; a summary of the meeting in which the draft IM was discussed; a working level draft CSP developed by Regional staff and comments on the draft and minutes of the review meeting at which the draft was discussed; the agenda and minutes of the Regional VP (Loan Committee) review meeting; a revised draft CSP incorporating changes agreed upon in the Regional VP review; the Operations Committee review draft of the CSP with comments on the draft from Regional staff and staff in EAS/DPG/DECVP; an agenda with background information prepared by EAS for the Operations Committee (OC) meeting to discuss the draft CSP; comments forwarded to EAS/DPG on the draft Operation Committee minutes and on the draft CSP; an Operations Committee Postscript written by EAS to incorporate decisions made in the OC meeting and comments received from all units following the OC meeting; the President's Review draft of the CSP or CAS and related comments from Bank units; minutes of President's Review meeting; the President's comments on the CSP following the President's Review meeting; handwritten notes taken by EAS/DPG staff and by the Chief Economist (DECVP) at the various review meetings; news notices and magazine articles (primarily from The Economist, Financial Times, and Far Eastern Economic Review) regarding the country that was the subject of the CSP; internal EAS, DPG, and DECVP memoranda discussing the various drafts and/or commenting on the various review meetings; comments on the CSP/CAS from staff within DEC units, especially the Policy Research Department (PRD), the Research Advisory Staff (RAD), and the International Economics Department (IEC); and correspondence between EAS/DPG staff and Regional staff during the entire drafting and review process. In some cases, the DPG representative who attended the Regional Loan Committee meeting wrote his own post-meeting review to the files. The file on South Africa is an aberration; it contain nothing but news updates on the political situation in South Africa from 1992 to 1994 and one summary of discussionsof the situation in South Africa at a December 9, 1993, meeting of the Executive Directors.

Records are arranged alphabetically by country or by region (e.g. Central America, Caribbean) or by organization (e.g. Organization of East Caribbean States [filed under Caribbean] or East African Community) and thereunder chronological.