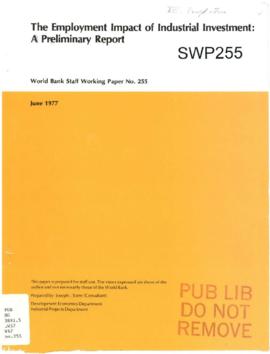 This series contains records relating to the World Bank's publication function while it was located in or reported to the Bank's External Relations unit or its predecessors. The Bank's earliest publication activities occurred in the Public Relations Department from 1947 to 1955; a division dedicated to the publications of Bank-authored materials was established in 1949. With the termination of the Public Relations Department in 1955, the Bank's publishing function was transferred to the new Information Department (INFO). The publication of Bank-authored and Bank-sponsored materials increased rapidly over the subsequent decade. The publishing function was moved to the new Information and Public Affairs Department (IPA) in 1968 where it remained through 1980. In that year it was removed from IPA and upgraded to a separate department called the Publications Department (PUB); it reported to various iterations of the External Affairs Vice Presidency through 1992. In that year, PUB was downgraded to a division, but continued to report to the External Affairs Department.

The Bank's publications function is responsible for the publication of Bank-authored and, in some cases, Bank-sponsored informational materials for a variety of audiences, including: the broader public (speeches, regional and country booklets, press releases, fact sheets, informational pamphlets, educational materials); members and partners (Annual Report, World Development Report, Policies and Operations, various guidelines and handbooks); development practitioners (sector papers, Country Economic Reports, occasional papers); and the academic community (monographs and articles). Its activities have generally involved: selection of Bank-authored materials for publication; editing and design of publications; supervision of the production process; and promotion, marketing and distribution of Bank publications throughout the world.

Records relating to the editorial decision-making and selection process of the Bank's Publication Committee are also included in this series. The Publication Committee was established in 1957 by President Black to develop and review policies and procedures with respect to the preparation, editing, approval and production of Bank publications. However, the committee's proceedings were, at least initially, devoted almost entirely to the consideration of specific proposals for publication submitted by staff including, especially, the Economic Development Institute. In addition to the director of the Information and Public Affairs Department (IPA), the committee members included vice presidents and department heads from throughout the Bank, including operations, EDI, administration, and the economics (or research) department. Records relating to the Publication Committee date from 1957 to 1978 and include meeting agendas and minutes as well as correspondence supporting the work of the committee.

This series also contains a large amount of material published by the Bank and maintained by publishing units as reference. These include: a copy of each World Bank Annual Report published between 1946 and 2003; copies of Annual Meeting Summary Proceedings from 1950 to 1991; and Development News - Daily Summary/Weekly Supplement from 1994 to 1999. A collection of "Finance and Development" is also included. "Finance and Development" was published quarterly by the World Bank and the International Monetary Fund (IMF) from June 1964 until June 1998 when the IMF became the sole publisher. English, Spanish, French and German language issues are included. Also included is a reference collection of "World Bank Loans at Work" for the years 1950 through 1967 except for a few missing issues. The publication was created for an external audience and contain photographs and descriptions of a variety of World Bank projects. Published versions of the World Bank Staff Working Papers series published between 1976 and 1986 are also included.

The series also contains a small amount of educational materials authored by the World Bank Group. The materials, which date from 1984 to 1986, were developed for secondary schools with the title "Toward a Better Tomorrow." Records include textual guides and reference materials as well as five film strips.

Original order of the folders has been maintained.

Records are subject to the World Bank Policy on the Disclosure of Information.