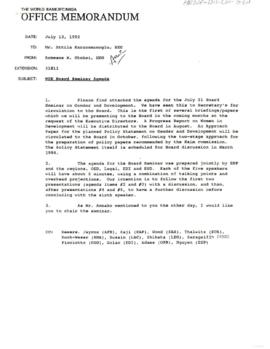 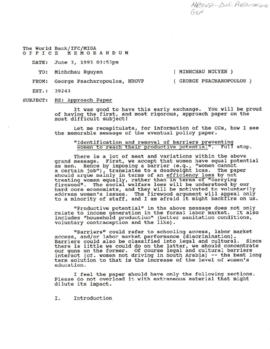 The vice presidencies were responsible for:

In January 1994, President Lewis Preston created a secretariat within the HRO (HROAN) responsible for managing a program of the Bank's 50th anniversary activities.

Records were initially transferred from HROVP to the Bank's Institutional Information Services Center (IISC) prior to their transfer to the Bank's Archives.

Records were initially transferred from HROVP to the Bank's Institutional Information Services Center (IISC) prior to their transfer to the Bank's Archives.

The majority of the records in this fonds are chronological files created by the HROVP. Most of the contents of these files are correspondence to and from institutions, agencies, governments, and departments external and internal to the Bank. The fonds also includes records which relate to communications as well as governance-related activities of the HROVP.

The Education and Social Policy Department (ESP), Poverty and Social Policy Department (PSP), and Poverty, Gender, and Public Sector Management Department (PGP) records sub-fonds contains the records created during the existence of those departments between the years 1993 and 1997. These departments combined a number of sector teams or groups, including Gender and Development, Poverty Analysis and Policy, and, temporarily, Education within the Human Resources Development and Operations Policy Vice Presidency (HRO). Individual staff often supported more than one sector at a time and this is reflected by folders that contain records of more than one sector. As a result, the records of these departments have been placed in the HRO fonds rather than separated and dispersed into their respective sector fonds.