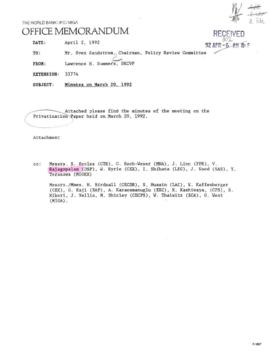 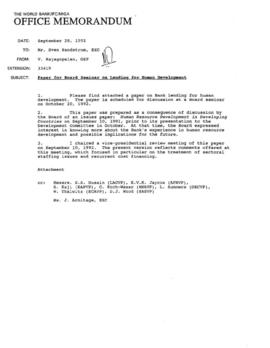 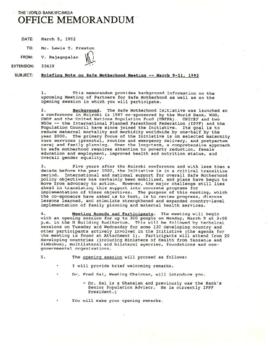 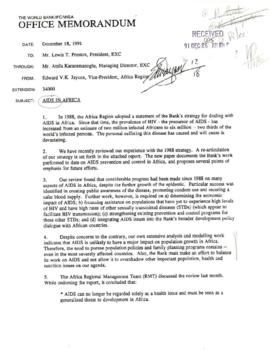 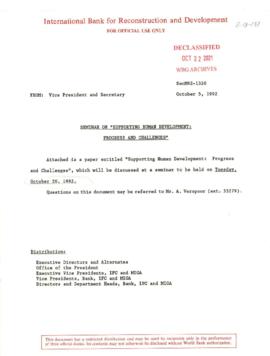 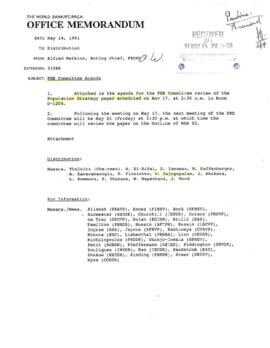 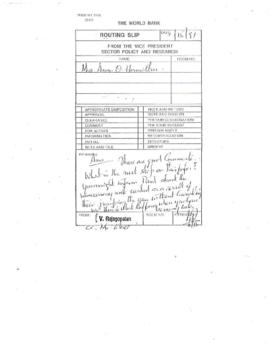 The Sector Policy and Research Vice Presidency (PREVP), later renamed the Sector and Operations Policy Vice Presidency (OSPVP), was established in May 1987, and reported to the Senior Vice President of Policy, Planning, and Research (PPRSV) or PPR Complex. The PREVP oversaw sector departments that were responsible for policy creation and analysis, support for operations, and sectoral research for emerging priority areas of the Bank. This fonds encompasses only the office of PREVP; see "Related units of description" section below for the location of records related to PREVP's subordinate sector departments.

The PREVP was created as part of the general Bank reorganization in 1987. It assumed some of the responsibilities previously located in the Operations Policy Vice Presidency (OPSVP) of the former Senior Vice Presidency of Operations (SVPOP). OPSVP's responsibilities had included overseeing a broad set of functions related to operations policy, country policy, sector policy, sector research, quality control, liaison, and operational support and advice. However, only the sector departments reporting to OPSVP that were responsible for sector policy creation and analysis, operations support, and sector research were transferred and placed under the oversight of PREVP. The remaining OPSVP functions were absorbed by the Central Operations Department (COD) and the Economic Advisory Staff (EAS) of the new Senior Vice President of Operations (OPNSV).

PREVP's primary functions were to lead, review, and disseminatethe policy and research work of the sector departments. Its responsibilities also included: advising the Senior Vice President, Policy, Planning and Research on Bank-wide sector strategies and objectives; strengthening the effectiveness of the Bank's policy advice to member countries; and maintaining strong links to the Operations Complex to ensure the operational relevance of its outputs.

The PREVP was led by Vice President Visvanathan Rajagopalan.

In January 1990, as part of restructuring the PPR Complex, the PREVP acronym was changed to PRSVP. The new PRSVP reported to the renamed Senior Vice President of Policy, Research, and External Affairs (PRESV).

In December 1991, President Lewis Preston's re-organization abolished all Senior Vice Presidencies. As a result, the PRESV and the subordinate PRSVP were terminated. The PRSVP was replaced by the short-lived Sector and Operations Policy Vice Presidency (OSPVP). The new OSPVP absorbed the sector departments responsible for sector policy, research, and operational support from the former PRSVP. It also absorbed some functions of the former Senior Vice President of Operations (OPNSV), including operations policy and procurement policy functions of the Central Operations Department (COD). It also absorbed the Secretariat of the Consultative Group for International Agricultural Research (CGIAR) from the former PRESV. The responsibilities of OSPVP included:

The OSPVP was led by Vice President Visvanathan Rajagopalan and supported by Director David Bock.

Records were transferred to the World Bank Group Archives using approved records retention and disposition schedules assigned to the OSPVP or a Bank-wide schedule for common records.

The fonds includes sector policy review and sector work program review records maintained by Visvanathan Rajagopalan when he served as the Vice President for Sector Policy and Research (PREVP/PRSVP), and its successor the Sector and Operations Policy Vice Presidency (OSPVP) from 1987 to 1992. It also consists of records maintained by Director David Bock when he served in the OSPVP Front Office. Bock's records are related to OSPVP management, budget records, and sector policy review from 1991 to 1992.