Fonds - Records of the Agriculture and Rural Development Sector

Fonds - Records of the Agriculture and Rural Development Sector 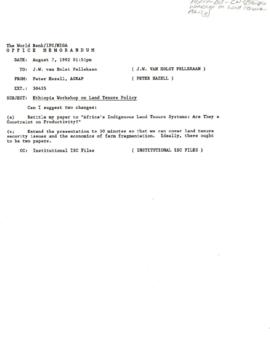 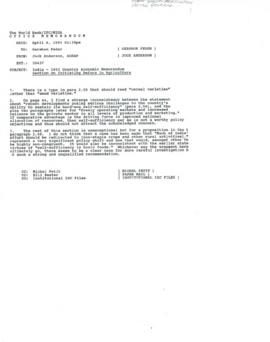 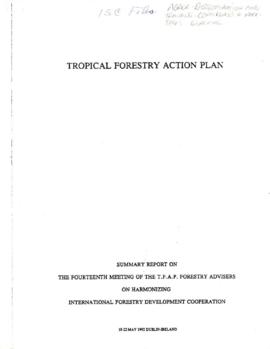 Records of the Agriculture and Rural Development Sector

The origins of agricultural and rural development sector work in the Bank began with the establishment of the Agriculture Division (TODAG) in the Technical Operations Department (TOD) in 1953. TODAG was created alongside the Transportation Division (TODTP), Industry Division (TODIN), and Public Utilities Division (TODPU). TOD responsibilities included:

In November 1968, PRJAG was upgraded to the Agriculture Projects Department (AGP). The AGP was created in a 1968 reorganization of all projects staff, which provided for the upgrading of the former projects divisions into projects departments. This was done to recognize their increased responsibilities and workload, and to strengthen the working relationship with the area departments responsible for project operations by according them equal status. AGP reported to the Office of the Director for the Projects Department (DRP). In November 1968, Lionel J. C. Evans assumed the role of AGP Director. The AGP responsibilities included:

As part of the World Bank reorganization in October 1972, most of the AGP's staff was transferred to regional projects departments in the newly established Regional Vice Presidencies in order to more effectively fuse country knowledge and technical skills. This left AGP with a core staff performing essentially advisory services for the Regions at their request, in addition to ongoing operational policy development and research and quality control with regard to agriculture project and sector work. As a sector department, it was also responsible for the formulation of development policy and defining possible strategies for long-term growth in the agricultural sector. The AGP that emerged from the 1972 reorganization did not have any formal divisional structure, and reported to the Central Projects Vice Presidency (CPS). In 1973, Montague Yudelman replaced Lionel J. C. Evans, and assumed the role of AGPDirector.

On September 1, 1973, a Rural Development Division (AGPRD) was established in the renamed Agriculture and Rural Development Department (AGP). The new division was given the task of formulating and implementing new project concepts aimed at assisting the rural poor in developing countries. This new division was a response to a speech given by Bank President Robert McNamara in Nairobi, Kenya of the same year, which addressed the issues of the rural poor. Related to the new focus on rural poor,the Secretariat of the Consultative Group for International Agricultural Research (AGPCG) was also transferred in November 1973 from the International Relations Department (IRD) to the Agriculture Department, but removed shortly after in 1974 when it was upgraded to an independent department.

In early 1975, a new Economics and Resources Unit (AGPER) was established in the AGP. On November 1, 1975, the AGP absorbed the nutrition functions from the Population and Nutrition Department (PNP), and placed them in a new Nutrition Division (AGPNU). It also established a new Rural Operations Review and Support Unit (AGPOR) to monitor its rural development program and assist the Regions on rural development project missions through the provision of staff, consultants, and briefs.

As part of the reorganization of the Central Projects Staff (CPS) into the Operations Policy Staff (OPS) in February 1982, the AGR regionalized its Rural Development Division (AGRRD), and established a new Agriculture Research Unit (AGRES). In mid-1984, the advisory staff of AGR was structured into three new units: the Finance Agro-Industries and Fisheries Unit (AGRFA); the Production and Technology Unit (AGRPT); and the Water and Resources Unit (AGRWR).

As part of the 1987 Bank reorganization, the majority of AGR sector staff were transferred to a restructured Agriculture and Rural Development Department (AGR) in the newly established Policy and Research Vice Presidency (PRE). Other AGR staff were transferred to operational units within the Bank's project-focused Regional Vice Presidencies where they were placed in the Agriculture Division of each Region's Technical Department (formerly Projects Department) or in Agriculture Operations Divisions within the new Country Departments. Staff remaining in AGR were responsible for:

On January 1, 1990, AGR started reporting to the Vice President of Sector Policy and Research (PRS). This reporting structure was maintained after PRS was renamed Vice President of Sector and Operations Policy (OSP) on December 1, 1991. The Agriculture Production and Services Division (AGRPS) was also replaced in December 1991 by the Agriculture Technology and Natural Resources Division (AGRTN).

In 1994, Alexander F. McCalla assumed the role of AGR Director. In May 1995, AGR was restructured and the divisions were replaced by the Agriculture and Forestry Systems Division (AGRAF), and the Sector Policy and Water Resources Division (AGRPW).

As part of the 1997 World Bank reorganization, the AGR was terminated and its functions transferred to the Rural Development Department (RDV) located in the Environmentally and Socially Sustainable Development Network (ESSD). RDV was created alongside the Environment Department (ENV) and Social Development Department (SDV). At its establishment, the RDV consisted of a Global Water Unit, and the Agricultural Research and Extension Group (ESDAR). In May 1999, RDV added the following thematic groups: agricultural production systems intensification; natural resource management; rural institutions and markets; and strategy and policy.

Transferred from the Sector.

The content of this fonds reflects a very small portion of the work of the Agriculture and Rural Development Sector. Subject files of the director of the Economics and Policy Division, of the forestry and fisheries specialists, and of the irrigation engineering adviser are included. Of these, the records relating to forestry are the most complete and have good potential for research use, as do the records of water policy found in both the records of the irrigation and drainage seminars and in the fisheries records. Records relating to UNDP projects executed by AGR are also included.

During the years 1972-1986 the official files of the Agriculture and Rural Development Sector were kept by the Non-Regional Information Center. Most of these records are located in the Central Files fonds, although some can be found in this fonds. In addition, however, many offices kept separate working files and the working files of the Agriculture and Rural Development Sector make up the records in this fonds, along with records created after 1986. The records of the Sector were appraised and scheduled in 1991. Subsequent moves by the Sector resulted in the destruction of many records, both scheduled and unscheduled, with the result that only the records of one division director and two specialists have been transferred to the archives. In addition, although the surviving records show that the sector staff was using computers by 1975 and by 1982 had a "data bank" on agriculture, none of the databases are in the archives.