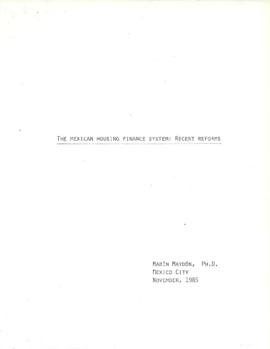 Records of the Urban Development Sector

The three departments of the Special Projects Department were responsible for:

The Special Projects Department was terminated as part of a Bank-wide reorganization in October, 1972. In order to more effectively fuse country knowledge and sector skills, sectors with a sufficient number of experts and an established lending program were largely decentralized; while maintaining a centralized core staff of Department advisors, the majority of staff were dispersed to regional project departments in newly established regional vice presidencies. The remaining centralized staff made up the sector operating departments and performed advisory services for the regions. Because of its small number of staff, the urban sector of the former Special Projects Department remained centralized within the newly formed Vice President, Central Projects (CPSVP), and was given the name Urban Projects Department (UBP). As a centralized operating projects department (COPD), the Department provided a full operational package of technical services to the regions and was responsible not only for policy formulation and quality control, but also for the planning, direction and supervision of project and economic sector work. On the date of its establishment, the Urban Projects Department comprised two departments: Operations Division I (UBPD1) and Operations Division II (UBPD2).

On June 1, 1976, staff working on urban projects were separated from those working on transportation projects and re-established as an independent Urban Projects Department (URB). It remained a centralized operating projects department and, as such, it continued to be responsible not only for policy formulation and quality control, but also for the planning, direction and supervision of project and economic sector work. This organizational restructuring was undertaken as part of the implementation of the Bank'snew Urban Poverty Program. The Program, announced in President McNamara's 1975 speech to the Board of Governors, was an interdepartmental Task Group chaired by Urban Projects Department director Mr. E.V.K. Jaycox and was designed to develop an Urban Poverty Action Program. Its oversight led to a significant increase in Department workload, as it became responsible for coordinating input of all organizational units involved in the Program as well as designing new policies, methods and projects to alleviate urban poverty.

At the date of its re-establishment in 1976, the Urban Projects Department was composed of the following divisions: Urban Division I (URBD1), Urban Division II (URBD2), Urban Division III (URBD3), the Sites and Services Monitoring Unit (URBMO), and the Operations Review and Support Unit (URBOR). The latter was responsible for supervising the Urban Poverty Program. By October of 1978, it was determined that the Department's policies, methods and standards were sufficiently mature to permit regionalization. Consequently, a significant amount of organizational restructuring took place during the following year in preparation for regionalization. On January 1, 1979, realignment of the Department's three operational divisions took place. Division I was assigned responsibility for Latin America, while Division II was assigned responsibility for Europe, Middle East, and North America as well as South Asia and Division III was given responsibility for East Asia and the Pacific. On or around this time a fourth operational division, Urban Division IV (URBD4), was created and given responsibility for Eastern and Western Africa. Also, on July 1, 1979, a new Tourism Advisory Service (URBTO) was established in the Urban Department, taking on some of the functions of the terminated Tourism Projects Department (TOU).

Regionalization of Urban Projects Department divisions began in July of 1979 when Division I of the Urban Projects Department was moved to the Latin America and Caribbean Region (LAC). In July of 1980, Division III was transferred to the East Asia and Pacific Region (AEN). At the same time, the Europe, Middle East, and North America responsibilities were separated from South Asia within Division II in preparation for the divisions' transfer to regional departments. Transfer of these two sections of Division II occurred on January 1, 1981. In March of the same year Division IV was split to form independent divisions for Eastern Africa and Western Africa in preparation for their regionalization. Transfer to regional departments occurred in August 1, 1981, for Eastern Africa Region (EAN) and October 1, 1981, for Western Africa Region (EAN). This concluded the regionalization of the Urban Projects Department.

In mid-1981, the Tourism Advisory Service (URBTO) was terminated. Some of its functions were transferred to the Tourism Advisor in the Front Office of the Urban Department (URBDR). In February of 1982, after the transformation of the Central Projects Staff (CPS) into the Operations Policy Staff (OPS), the Department began to report to the Vice President, Operations Policy (OPSVP).

On July 1, 1983, the Urban Projects Department was merged with the water supply functions of the former Transportation and Water Department (TWD) to form the new Water Supply and Urban Development Department (WUD). The Department continued to report to the Vice President, Operations Policy (OPSVP). The Department operated as a sector department with responsibility for operations and development policy formulation, research,operational support and quality control for project and sector work. Anthony Churchill, who had taken over from E.V.K. Jaycox as the Urban Projects Department (URB) director on October 15, 1979, was named director of Department; Ping-Cheung Loh would take over on July 1, 1986.

The structure of the Department comprised an Operations Support and Research Division (WUDSR), which in turn comprised an Operations Research Unit (WUDOR) and the UNDP-affiliated Water Supply and Sanitation Unit (WUDWS) and Applied Research and Technology Unit (WUDAT). On October 1, 1985, the Department was reorganized to bring the policy advisors together under the Senior Advisor heading of the Operations Policy and Research Staff (WUDOS), and the rest of the staff under the Chief of the renamed Operations Research and Policy Division (WUDOD).

On July 1, 1987, a Bank-wide reorganization resulted in the termination of almost all organizational units. A new department, the Infrastructure and Urban Development Department (INU), incorporated the previous Water Supply and Urban Development Department and Transportation Department, and was placed in the Sector Policy and Research Vice-Presidency (PRE, then, after January 1, 1990, the PRS). The PRE had no responsibility for managing operational activities but, rather, focused on operational support, the formulation of Bank-wide sector policies and overseeing the ex post evaluation of Bank-wide sector work and lending. The units within the PRE concentrated on policy creation and analysis, support for operations and sectoral research for emerging priority areas of the Bank.

Each Sector Department was responsible for the following:

Four years later, in 1997, the thematic Vice-Presidencies were reorganized to strike a better balance between country focus and sectoral excellence. To facilitate sharing of expertise and knowledge, the Bank established networks that linked Bank-wide communities of staff working in the same field across organizational boundaries and with external partners. The networks formed a virtual overlay on the existing Bank organization, and were intended to link staff working in the same sectors throughout the Bank, whether the staff was located in the Regions, in the Central Vice-Presidencies' SectorDepartments, or other Vice-Presidencies.

Fonds consists of records related to activities undertaken by the urban development sector. The majority of records in the fonds are reference materials created or received by the Water Supply and Urban Development Department (WUD) and, more specifically, the Water Supply and Urban Development Department Operations Support and Research Unit (WUDOR). These records were created by Unit staff as well as by other World Bank offices and consultants and organizations external to the bank. Materials include research and discussion papers on a variety of topics related to the World Bank's urban development function. The fonds also contains records relating to the operation and administration of the Urban Poverty Program by the Urban Operations Review and Support Unit (URBOR) and to the research and reporting activities for which it was responsible. Records include reports and memoranda created by the Unit as well as by Regional offices. Finally, the fonds consists of records related to the Conference on Improving the Effectiveness of Urban Assistance convened by the World Bank in Washington on December 2-6, 1985. Records include planning materials as well as speeches, speaker biographies, and a published copy of the summary of proceedings.

Note that not all urban development operational projects (loans, credits, grants, and trust funds) are represented in this fonds. Researchers who are interested in operational projects are encouraged to reference the Projects and Operations Database on-line. The Projects and Operations Database search can be narrowed to include only those projects within the urban development sector and it contains some final reports specific to each project. Should researchers wish to access the archival records related to these projects, cite the Project ID number when making arequest.

Record sets of each center's publications are held by that center.