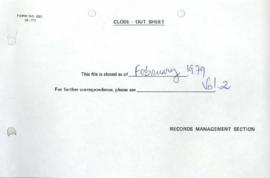 The records in this subfonds were maintained by the Non-Regional Information Center (NRIC). The NRIC served as a centralized filing unit for the Bank, and arranged records according to Bank-wide classification schemes for the record group of administrative "central files" or "non-regional files". The NRIC served as one of multiple Information Centers for the Bank, which generally distributed the Bank's records into two main record groups: 1) general or non-regional, and 2) operational or regional. The records in this subfonds were not arranged by classification schemes or series specific to a department or division, but as a sub or sub-sub group to the larger "central files" record group. The NRIC were transferred to the custody World Bank Group Archives with the termination of NRIC in 1987.

Records were transferred to the World Bank Group Archives from the Non-Regional Information Center (NRIC).