Series - Research Proposals that were Withdrawn or Rejected 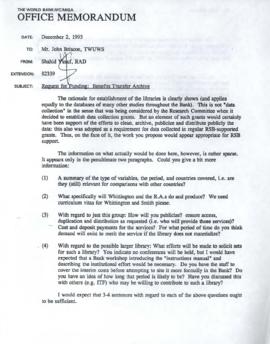 Research Proposals that were Withdrawn or Rejected

The files for the 1985 - 1988 period for research proposals that were rejected or were withdrawn by the staff members who submitted the original proposals appear to have been maintained by the Secretary to the Research Projects Approval Committee (REPAC). Research funding was limited to departments which normally did not have in-house research capacity such as the Regional departments. For the 1989 - 1997 period, files for research project proposals that were rejected by either Research Advisory Staff (RAD) or the Research Committee (RC) or were withdrawn by the staff member who submitted the original proposal were maintained by RAD.

Among the documents that can be found in rejected files for the 1985 - 1988 period are: the research project proposal submitted to the Research Administrator (RA), comments made on the proposal by RA or by internal or external referees who agreed to comment on the proposal, responses to referees' comments, the report of the REPAC subcommittee to all REPAC members on the proposal; and minutes of the REPAC meeting or correspondence indicating action taken on the project proposal. Appeals of rejections by REPAC are in some files along with REPAC's responses.

A number of files for the 1989 - 1997 period contain requests for information regarding the procedures for requesting funding for a research proposal or for advice as to whether a specific proposal fit within the guidelines of the RC for projects funded from the Research Support Budget. The more complete files for rejected projects for the 1989 -1997 period include: a formal project proposal; correspondence between the RAD staff and the project manager; RAD's correspondence with referees; the referees' comments and the project manager's responses to RAD regarding issues raised by the referees; intra-RAD memoranda regarding the project proposal; a report from the Research Committee subcommittee that reviewed the project proposal; replies from the manager to specific questions from RAD staff; handwritten notes from RAD staff; and the official memorandum from RAD stating that the project had not been approved. There are a few files for pending proposals for which no final action was taken or for which no formal proposal was submitted.