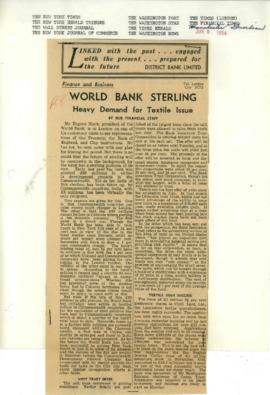 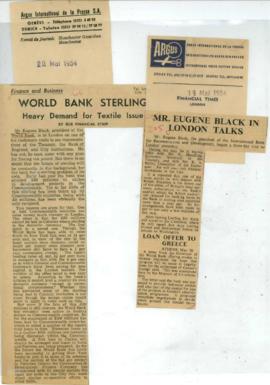 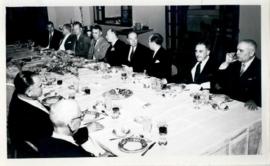 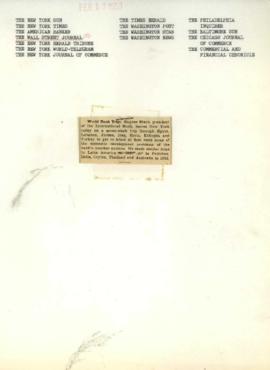 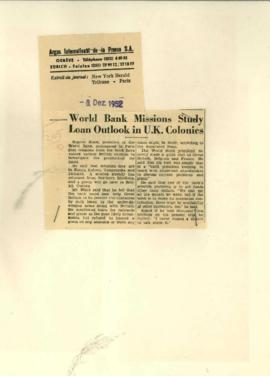 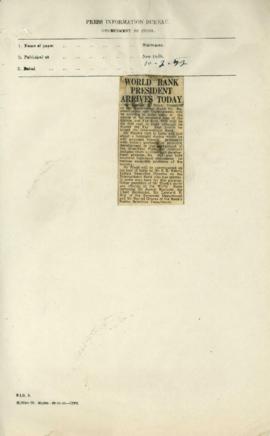 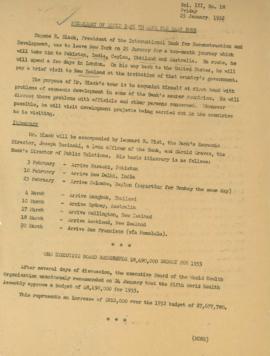 The earliest textual records dating from 1949 were part of the Central Files, then General Files later maintained by the Non-Regional Information Center (NRIC); these files were transferred to the Archives in 1994. The press clippings, case book and other subject reference files maintained by the Information and Public Affairs Unit (IPA) were received by the Archives in 1995. The remainder of the records were transferred by the EXT Media Division in accordance with approved records retention schedules.

Series consists of a variety of records created and used by External Relations units and its predecessors over time to monitor press coverage of World Bank Group news and events and, if necessary, to formulate responses to that press coverage.

A large portion of the records are press clippings or photocopies of clippings dating from 1949 to 1998, however, there is a gap in the clippings from 1962 to 1972 and 1980 to 1993. Press clippings were primarily collected from American newspaper outlets including the Washington Post, Washington Star, New York Times and others, as well as foreign print media such as the London Financial Times. The clippings cover Bank activities and developments, global economic and development events, Annual Meetings and Annual Reports, statements, speeches and trips of the Bank Presidents beginning with President Eugene Black, IDA, Bank personnel, and World Bank anniversaries beginning with its tenth anniversary. There are weekly press reports containing clippings beginning fromNovember 1976 to 1979. The earlier press clippings dating from 1949 were created by the Public Relations Department led by Director Harold N. Graves who served from November 1950 to 1967. Another set of photocopied press clippings relating to Bank activities and its major meetings and conferences were maintained by the News Bureau of the EXT Media Division. These files predominantly date from 1994 to 1998, however, there are two files with information on IDA from 1962 to 1996, and World Bank project summaries from 1977 to 1979. Press clipping files also include a scrapbook on various Bank issues in India in 1957, and press reports, also referred to as news bureau dissemination reports, dating from 1994 to 1998, that provide summaries of news articles, editorials or letters to the editor about the Bank and its activities. Many of the dissemination reports include an attached memo from the Media Division (EXTME) to the External Relations Vice Presidency (EXTVP) that reports on preparation, major EXT activities, media coverage, and lessons learned. The dissemination reports also contain all press releases, briefings, talking points, and letters to the editor, all related to the event, as well as an analysis of media coverage for internal use by EXT to provide a brief overview of media perception and to examine stories for accuracy and thoroughness. Press clipping files also occasionally contain typed translations of foreign news articles and World Bank news releases.

The series also contains compiled reference material including country articles, financial statements, and case books used for internal or public information, created by the Information and Public Affairs Unit (IPA) in the 1960s and 1970s. Country Article files, dating from 1967 to 1972 (predominantly 1970-1972), contain summaries or information reports appended with financial data about developed and developing countries, basic country data and background on its economy, history of Bank operations in the developing country, and figures on Bank loans and IDA credits. For developed countries, the report includes a summary of the country's history of its relationship with the World Bank Group, Bank's borrowings in the country, disbursements, and the country's goods/services contributed to Bank-funded projects and Bank loans.

Other reference files contain: financial statements for World Bank, IDA and IFC, 1966-1967; policy documents including Board papers 1973-1976; a file titled "Irreverent Inquiries" that provides responses to common Bank queriesand criticisms; and an IDA Briefing Book prepared in 1977 that explains Bank policies on a variety of topics. The IDA Case Books from 1961 to 1974 created by IPA include information on a variety of topics, including: IDA replenishment; health and nutrition; and IDA's relationship with the United States government. There is also a list of IDA publication credits from 1961 to 1969. The series also contains Annual Meeting files, 1966 to 1977, compiled for the Special Guests Office including lists of external and press attendees, as well as administrative correspondence on press attendees' attendance and accommodations.

Also included in the series are Public Relations general files, dating from 1947 to 1968, mostly containing correspondence of the Public Relations Department. Records include copies of memoranda and letters, meeting minutes and summaries, handwritten notes, and working documents relating to: the Bank's public relations-related activities such as articles and speeches given by the Bank President and senior staff; leaks in the press; marketing; film and radio production; the first meeting of the Committee on Information, February 20 1947, which examined the Bank's communications and relationship with the press, as well as the Ad Hoc Committee on Internal Information from 1951. There are also yearly reports outlining all publications, press releases, and speeches by Bank staff. A small volume of files relate to the production of Bank posters, Annual Meeting exhibits, and the Bank's participation at International Exhibitions (Expo) as part of the UN family pavilion. The exhibit files contain original invitations to the exhibition, copies of minutes of the UN Expo Committee meetings, copies of outgoing letters and cables to government organization officials and United Nations headquarters, and printed materials from external organizers. There are also two files relating to the Bank's participation in the Washington World Conference on World Peace Through Law held in Washington, DC in September 1965.

Original order of the records established by the creator has been maintained. Most files are arranged by subject.