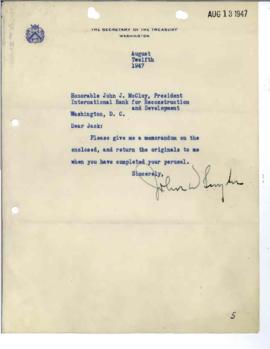 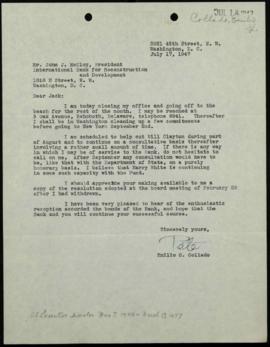 Prior to joining the Bank, McCloy spent twenty years practicing corporate law in New York and Europe. He also served as Assistant Secretary of War under Henry L. Stimson in the Roosevelt administration during World War II. By the timehe was nominated as World Bank President, McCloy had a broad network of relationships in both business and government spheres.

McCloy entered the Bank during a time of great uncertainty for the organization. Internally, the issue of who would command executive authority - the Bank president or the executive directors - had yet to be resolved. Externally, the World Bank was viewed with skepticism by many. Impatience for lending operations to begin, uncertainty regarding Bank capital, and questions about leadership were some of the more common concerns expressed by government officials, Wall Street, and the media.

The relationship between the Bank president and the United States government was also resolved as a condition of McCloy's acceptance of the Bank's presidency. McCloy demanded that the Bank and the Office of the President not be subject to the dictates of the U.S. government and the American Executive Director. A related condition of McCloy's acceptance of the Bank presidency was that Eugene R. Black would be named the new Executive Director representing the United States.

While applications for lending had been received prior to his arrival, the signing of the first World Bank loan on May 7, 1947 didn't take place until after McCloy took office. The loan, for $250 million, was made to Credit National, a semipublic French corporation, for post-Second World War reconstruction. Policies related to interest rates, security requirements, and fund dispersal were established during the preparation and negotiation of this and other early loans.

The majority of Bank lending under McCloy was to European countries in support of their reconstruction following the War. However, McCloy foresaw and supported a quick transition to bilateral aid for reconstruction purposes, allowing the Bank to increase investment in the poorer and post-colonial countries of Latin America, Africa and Asia. The Bank's first development loan was made during McCloy's time in office. On March 25, 1948 Chile signed a loan agreement for $15 million to fund hydroelectric and agricultural development.

McCloy also presided over the Bank's first bond offering. The offering of $250 million took place in July of 1947. The offering was deemed a success, as it was substantially oversubscribed.

As the Bank was still a relatively small institution under McCloy's leadership, it maintained a simple organizational structure. Robert Garner, who had joined the Bank at the same time that McCloy was named Bank President, served as the lone Vice President throughout McCloy's tenure. Senior managers, including department directors, had regular and direct access to the President on an informal basis.

McCloy's resignation from the Bank was announced on May 18, 1949.

The bulk of the records of the President's office from the period of John J. McCloy's service as President of the World Bank are with the McCloy papers in the Archives of Amherst College. Only a few files from his presidency remain at the World Bank.