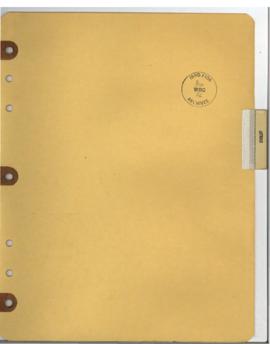 Many of the records in this series were transferred directly to the Archives from the Information and Public Affairs Department (IPA) in the late 1970s and early 1980s. After transfer, as part of the Archives' Records and Archives Management Improvement Program (RAMIP) in 1990-1991, they were provided with a newly created records retention and disposition schedule. Other records in this series were transferred from External Affairs (EXT) units to the Archives using approved records retention and disposition schedules.

This series contains speeches made by Bank staff and, in lesser amounts, Bank consultants, Executive Directors, and government officials. These records were maintained by EXT staff as a reference collection. In addition to speeches, a small amount of similar materials are included, such as: talking points for speeches; transcripts of radio addresses, lectures, press conferences, and interviews; and a small number of published articles.

Note that, while one of EXT's responsibilities was to serve as speechwriter for the Bank President and other senior staff, there is no evidence of speechwriting activities contained in the records of this series. Additionally, EXT staff were regularly responsible for fielding requests for appearances and speeches by Bank Presidents and managing logistics related to those appearances; records related to these activities are likewise not included in this series.

Speeches made by every Bank President from 1946 to 1999 are included. Presidential speeches contained in this series were delivered to a variety of audiences, both internally and externally, although the latter is more common. The most frequent audience is the Board of Governors at the Bank's Annual Meetings. Other external audiences include international organizations (including the United Nations and its various councils, divisions, and conferences), clubs, associations, and academic institutions.

The speeches of Bank Presidents contained in this series are often small pamphlet-sized publications. This is most commonly the case with the annual Address to the Board of Governors given at the Bank's Annual Meetings. Other formats include photocopies and press releases.

Only three speeches made by President Eugene Meyer are included in this series. Two of the speeches, both dating from 1946, are from: the Annual Meeting of the Academy of Political Science; and a dinner in honor of the World Bank and International Monetary Fund's (IMF) Boards of Governors. The third speech, from 13 January 1947, was given to the Canadian Club subsequent to Meyer's resignation as Bank President.

President John J. McCloy's speeches date from April 1947 to June 1949. In addition to speech transcripts and the scripts of two television programs McCloy participated in, the script for his three-part lecture given at John B. Stetson University in February 1949 is also included. Statements made by McCloy to the United States Senate Committee on Foreign Relations in January 1948 and the House Committee on Bank and Currency in May 1949 are also included.

The speeches of President Eugene Black date from 1947 to 1962. These include speeches from 1947 and 1948 made by Black while serving as the U.S. Executive Director to the Bank. In addition to his speeches, a single folder includes Bank press releases related to Black's appointment as President of the Bank and to other matters. A small number of photocopied magazine articles profiling Black are also included.

President George D. Woods' speeches date from January 1963 to May 1968. In addition to speeches, a small amount of Bank press releases related to Woods' appointment as Bank President as well as magazine articles related to Woods and the World Bank are included; the latter includes a copy of Forbes magazine dated 15 December 1963 featuring Woods on the cover. An article authored by Woods and published in Foreign Affairs magazine in January 1966 is also included.

The majority of President Robert S. McNamara's speeches are in published form and date from 1968 to 1981. Three speeches given by McNamara following his departure from the World Bank are also included: the Sir John Crawford Memorial Lecture (1 November 1985); the Africa Leadership Forum (21 June 1990); and the Annual Conference on Development Economics (25 April 1991).

President A. W. Clausen's speeches date from 1981 to 1986. Clausen's addresses to the Board of Governors are available in published pamphlet form as are a small number of other speeches. The remainder are photocopies.

President Barber Conable's speeches date from 1986 to 1991. Conable's addresses to the Board of Governors at the Annual Meetings from 1988 to 1990 include translations in a number of languages, including: Arabic, Chinese, Japanese, Spanish, Portuguese, German, and French.

President Lewis Preston's speeches date from 1991 to 1994. Only talking points are included for a number of his speeches.

President James D. Wolfensohn's speeches date from 1997 and are relatively few in number. Speeches are filed alongside those of other Bank staff and external political figures.

Bank staff (non-President) and other speeches

This series also contains speeches made by Bank Group staff (including International Finance Corporation [IFC] staff) and, in far less number, Bank consultants, Executive Directors of the Bank, country leaders and ministers, and other prominent external figures. The majority of the speeches are by International Bank for Reconstruction and Development (IBRD) staff. Speeches date from 1946 to 1993. In addition to speeches, a small number of interview transcripts, statements, and published articles are included. In most cases, there are between one and three speeches per individual, although in the case of more senior staff, the number of items can exceed a dozen. Drafts of speeches are included, although in very small number. Translations of speeches are included for some speeches and in a few cases the speech exists only in a language other than English; in the case of the latter, the most common languages are French and Spanish.

Note that some speeches by senior External Relations staff that were filed alongside the speeches of other senior Bank staff are included in this series. These include speeches, lecture and press conference transcripts, speech notes (with hand-written annotations), and published articles dating from 1996 to 1999 by EXTVP Mark Molloch Brown.

A group of speeches maintained as reference copies by EXT speechwriters from 1981 to 1989 are also included in this series. Speeches made by Presidents Clausen and Conable are the most common in this collection. Conable's speeches from August 1987 to September 1989 are interfiled with speeches made by other senior Bank staff and prominent external figures. Conable's speeches, however, still make up the majority of the records during this period.

Alternatively, if you know the name of the speaker or the title of the speech you are looking for, you can employ the Search option at the top right corner of this screen.