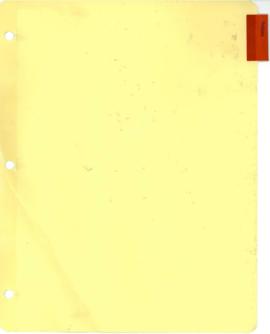 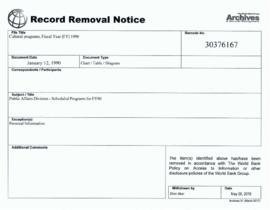 This series consists of internal Bank staff publications and newsletters as well as photographs and negatives used in those publications. Also included are records relating to internal communications strategies. A small amount of records related to community relations programs is also included.

Bank newsletters started with the publication of International Bank Notes in 1947. International Bank Notes was published out of the Bank's Personnel Division. The newsletter was intended to foster a sense of community among staff and provide information of a personal nature to Bank staff rather than duplicating material from press releases and official memorandum. The publication highlights social events, marriages, births, and the arrival of new staff. It also reports on recreational events and offers favorite cooking recipes submitted by staff. The publication started out with a 2-page format but soon after transformed into a small booklet with photos. By the end of its run, International Bank Notes had a more polished look and tone including a table of contents, multi-page interviews with Bank staff, and articles about Bank activities and projects. International Bank Notes Supplements were also published in six monthintervals. These were subtitled "Introducing New Professional Staff", and include a biography and picture of new staff.

In 1971 the staff newsletter publication function was moved to the Information and Public Affairs (IPA) Department and was renamed Bank Notes. It took on a larger physical format with the look and feel of a newspaper. Its content, however, did not change significantly. In addition to the combination of staff- and operations-focused content, the publication included a Bank Calendar of upcoming social events and meetings, a column entitled Women's Information and Volunteer Service (or "WIVES"), a Cross Currents page containing classified ads, as well as humor and food columns.

The next and final version of the physical staff newsletter was titled Bank's World. It was a glossy color magazine and was published from 1982 through 2000. Each issue included a cover story article, articles about development projects, reports from various Country Departments, and a new column called AnswerLine that provided answers to questions of broad interest concerning the Bank Group's policies and procedures. Other features included multipage in-depth articles called On the Record which were often written by the Bank President and a space entitled Around the Bank which detailed news from Executive Directors and Vice Presidents. Some issues have indexes of stories. A special June/July 1987 issue titled The Reorganized Bank: Managers and Senior Staff is also included. In 2000 the print version of "Bank's World" was discontinued and replaced with an online intranet version called "Bank's World Today".

An index of articles in these three publications from 1947 to 1993 is also included.

The series also contains a variety of other newsletter-type publications intended for Bank staff. This includes copies of "Report - News of the World Bank Group" from 1973 to 1982, complete except for a small number of missing issues. The publication was produced by the IPA and the Publications Department (PUB) for both internal and external audiences. It provided general news of economic development as well as reports on World Bank Group activities.

There are also printouts of "Updates on the Bank Renewal" (or its informal name "Manager's Updates"), an electronic newsletter that was produced and sent bi-monthly by the Chief of Internal Communications from June 20, 1997 to December 1998. The updates shared Bank-wide news from the Board; summaries of the President and Managing Directors' town halls and senior management meetings; and progress on change initiatives.

Also included is a newsletter created by the Development Services Department (DSD) that was intended to be sent to field staff to keep them abreast of current activities in the Bank such as Bank membership, borrowing, IDA financing, and staff and organizational news. While DSD existed from 1961 to 1973, this series only includes issues of the DSD newsletter from 1966 to 1973; it is unclear if the Department published this newsletter prior to 1966.

Also included in this series are copies of the EXT-produced Development News Weekly Supplement from 1981 to 1990 and Development News Daily Summary from 1995 to 1998. Both are bound collated supplements of external press clippings related to the Bank and its activities. The articles range from governmental news, various developmental projects, and financial activities of the Bank.

Records related to EXT's internal communication support and engagement activities from 1988 to 1999 are also included. Records document communication strategies developed for internal programs and change initiatives as well as the dissemination of information and documentation about the initiatives, and research methods measuring staff response to initiatives. Internal communication records include correspondence and other materials primarily created by Internal Communications Division Chief, Rachel Weaving, and other senior staff. There are emails and facsimiles sent between the division and EXT Director, Managing Director's staff and other Bank departments. Correspondence is filed with summaries of Bank meetings given by the Bank Group President and global offices or meetings led by other senior staff, draft outlines, statements and emails, questionnaires and surveys, reports, external reference material, briefing material for senior management, and handwritten notes.

Many records relate to the 1997 Bank-wide reorganization and the 1997 Staff Survey and follow-up, as well as the Bank's 1997 Strategic Compact, a reform and renewal plan intended to increase Bank efficiency and effectiveness. There are files, 4 audiocassettes and a floppy disk relating to Managing Director Sandstrom's Open Forum, February to October 1997.

Other records relating to internal communications include: the development of a comprehensive Bank-wide communications strategy for fiscal year 1989; logistics and communications for Annual Meetings including briefings and broadcasting; 11-17 Network Launch and its steering committee; Knowledge Management Board (KMB); Human Resources Reform and Cost-Effectiveness; and photograph displays and exhibits including a World Bank mission photograph exhibit at the Bank and IFC between 1998 and 1999 and the Greening the Bank fair and exhibit. The exhibit files contain copies of emails, facsimiles, copies for displays, working documents, and reference material related to planning and content creation for the Bank exhibits.

A small volume of records related to Bank community relations programs are also included in this series. Records consist of administrative materials for charity programs such as the United Way campaign and other charitable fundraisers.