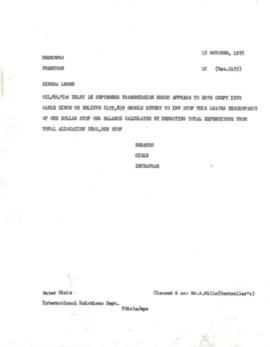 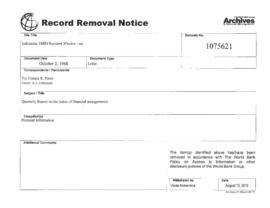 Most of the records were transferred to the Archives by the International Relations Department's Technical Assistance Division (TAD) in several transfers between 1977 and 1980. Additional technical assistance files were maintained by the Non-Regional Information Center (NRIC) that was established in 1978 to manage the records created by non-operational units including the External Relations' International Relations Department (IRD); these were transferred to the Archives in 1994.

The majority of the records in this series relate to technical assistance projects that are almost entirely funded by the United Nations Development Programme (UNDP) or its predecessor, the UN Special Fund (UNSF), but administered and executed by the Bank. A very small portion of the series relates to technical assistance directly supporting Bank Group lending operations.

Records document TAD and its successor TAL's role in coordinating technical assistance between the Bank's operating departments and UNDP and UN or, for Bank-funded projects, between project consultants and Bank departments. Records consists of correspondence and supporting documents that cover the appraisal and negotiation of proposed projects in addition to the project's administration. Topics include: payments and use of funds; budget revisions; TA consultants contract arrangements; and project evaluation and reporting.

Correspondence is between TAD and the respective World Bank regional or sector departments or vice presidencies, UNDP and other UN officials, senior government officials, and project manager consultants and includes copies of outgoing memoranda, letters, telexes and cables. The correspondence is filed with project documents and includes: proposals and plan of operation; contracts; externally-produced reports, many issued by UNDP; Bank project evaluation draft reports and final reports; newspaper clippings; and occasionally plans and diagrams. A portion of country files that are labelled 'Miscellaneous' contain correspondence and supporting proposals for projects requested by the government for UNDP assistance and were sent by UNDP officials for Bank comment.

Also included in the series are IRD correspondence files relating to general technical assistance administration and procedures. Records include copiesof outgoing memoranda between IRD senior staff including Director Shirley Boskey and successor Shahid Javed Burk as well as TAD Chief Vincent J. Riley, senior advisors, and other Bank staff. Some correspondence is authored by IRD Directors or other senior staff to be sent by World Bank President McNamara or Clausen, or Vice President of External Relations Jose Botafogo. A portion of the correspondence is also with external bodies including UNDP officials. Series also contains semi-annual reports on the Bank's technical assistance activities and other ad hoc reports as well as files related to UNDP's annual General Council meetings (1975-1976).

Although the technical assistance function was transferred from IRD to the regional vice presidencies in 1981, a few correspondence files in this series extend to 1986 and reflect IRD's continuing function in advising on operational activities with UNDP and UN bodies. Files from this period contain copies of outgoing memoranda and reports about technical assistance projects managed by UNDP, discussion of the relationship of technical assistance advisors with UN Resident Coordinators, and communication on country projects as well as a copy of World Bank Technical Paper WTP23 "Twinning of Institutions: Its Use as a Technical Assistance Delivery System", released in 1984.

Original order of the records has been maintained. Project records are mostly arranged by country and then by project.