GATT : News of the Uruguay Round - 1v

GATT : Uruguay Round, Negotiating Group on the Functioning of GATT, FOGS Study / Other - 1v

GATT : Accession of Portugal and Spain to the European Communities - 1v

GATT : Review of Developments in the Trading System - 4v

This reading file covers Balassa's work as a consultant for the World Bank from September 1966 to May 1991. Bela Balassa was recruited in 1966 by Irving S. Friedman, The Economic Adviser to the President, as a consultant adviser to the Economics Department of the Bank. Balassa had recently been appointed Professor of Political Economy at The Johns Hopkins University and prior to that was on the faculty of Yale University. Balassa worked closely with Friedman and Andrew Kamarck, the Director of the Economics Department, and later with Hollis B. Chenery after he was appointed Economic Adviser to the Bank President in October 1970.

Through successive Bank reorganizations, Balassa served as a consultant policy adviser and prepared papers at the request of Operations and other Bank units, led Bank missions to developing countries, supervised research performed in Regional offices, and conducted his own research and writing. He served as a consultant in DEC at the time of his death on May 10, 1991.

During theperiod 1966-1970, the series includes Balassa's letters and Back-to-Office Reports for missions to Argentina, Korea, Taiwan, and Israel, letters sent in conjunction with the Development Strategies in Semi-Industrial Countries and Export Promotion in Developing Countries projects, and letters to outside economists invited to attend meetings at the Bank on the Structure of Protection in Developing Countries.

Letters and memoranda for the 1971-1981 period continue to document his duties as Research Adviser to the Economics Department and to the Vice President, Development Policy Hollis Chenery who was appointed the Economic Adviser to the Bank President. Balassa also consulted with Ernest Stern, Senior Adviser, Development Policy and officials of other Bank departments on policy issues and participated in economic or advisory missions. In February 1972 he was transferred to the Development Research Center. Letters and memoranda for the period afterward indicate that Belassa continued to lead or otherwise participate in missions; performed other policy advisory work for Regional Offices, other parts of the Bank, and governments of less developed countries; assisted the Research Committee (later the Research Projects Approval Committee [REPAC]) in panel review of research proposals; provided leadership to the Industrial Development and Trade Steering Group; commented on the quality and distribution of World Bank staff working papers; and conducted his own research and writing

Beginning in 1982, Balassa reported to the Vice President, Development Policy Staff (later Vice President, Economics and Research [ERS]) and to the Director of the Development Research Department. Letters and memoranda indicate his increased involvement in policy advising and operational support both to senior Bank management and Regional Offices and continued participation in missions and in the Research Committee. After the 1987 Reorganization, Balassa reported to the Vice President, Development Economics and Chief Economist (DEC). A copy of an August 4, 1987 report on World Bank Research prepared at the request of the Senior Vice President, Policy, Planning and Research is in the file. A number of letters and reports after that date and continuing through 1991 concern Balassa's review of papers in the Policy, Planning and Research (PPR, later PRE [Policy, Research, and External Affairs]) Working Papers series. Included in the PPR/PRE series were World Development Reports and other papers prepared by organizations within DECVP, IEC [International Economics Department], and CEC [Country Economics Department].

Throughout the series are copies of papers Balassa prepared at the request of the Board and Bank offices, copies of research papers and lectures prepared for Bank-IMF sponsored conferences and for meetings of international organizations, reports prepared after returning to the Bank from outside meetings on economic issues and trade policy, and letters concerning his books and other publications. 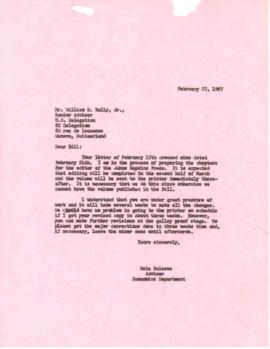 Research on Economics and Development - Bela Balassa - Chronological Record - May 1986